Z is for Zoe 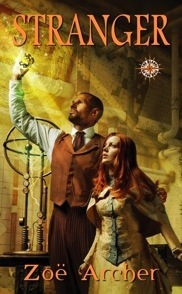 Zoe Archer came to my attention after a recent RWR article about the perception of having made it.  The article offered a healthy dose of reality.  Basically it address the "what comes next?" question after each step on the road to publishing.  It warns us not to rest on our laurels and that success is a series of baby steps.  She shared her own experiences in becoming published, sort of successful, finding a bigger agent, being dropped by that agent, and then taking risks that payed off.

In her article, she wrote that at one point, while feeling frustrated at an industry that seemed to demand Regency, she decided to throw genre norms into the wind and wrote a paranormal historical romance set in Mongolia. This is where I realized I had to read her books.

I picked up Stranger.  It turned out to be the final book in a series, but it stood on it's own.  Set in the Victorian period, the story spanned the USA, England, and the realm of Faerie. It involved both magic and technology (I would almost classify it as Steampunk, but not 100%).  The characters that had been featured in previous books were intriguing (I will definitely read all the Blades of the Rose books). The primary characters, well, I did not want their story to stop.  They were layered, flawed, sympathetic, vulnerable, and strong.  The romance was HOT but always part of the developing story and character growth.  Did I mention it was hot?

Rebel by Zoe Archer has been nominated as a finalist for this year's RITA award.  I'm looking forward to acquainting myself with more of her stories.

Sounds intriguing. I'll have to check it out. Thanks.

Sounds really cool! Just goes to show that we need to write what WE want to write - not what we think people want us to write.

Personally, one of my favorite posts from your A-Z was the 'realistic' love scene between the two romance characters. I was funny and touching at the same time - they loved each other despite being humbly human. I would read romance like that, even though most romance readers are looking for the fantasy. I appreciate reality.

I have really enjoyed reading your posts everyday! I hope you keep up writing them daily even though I know it is tough. You are an inspiration to me! Thanks :)

What the heck happened around here?! Its all different and stuff...and why are you on Z? What day is this?
Edge of Your Seat Romance

Interesting! Did she find a new agent after she wrote her paranormal historical romance or did she self-publish?

Way to finish the A to Z Challenge!

You're already up to Z? Congratulations! I like the statement that success is a series of baby steps.

I'm stopping by on the A-Z Challenge.

Yes, I got to Z on April 26th. This makes perfect sense if you consider I did not take Sundays off. Hindsight, that was a problem. C'est la vie.

Lindsay, I think my P post is my favorite too. Thank you, btw. *blushes*

Shannon, yes, Zoe Archer got picked up by a great agency and that series is published through Kensington/Zebra.

Erin, we did it! Congratulations! I have an award for you!!

I am exhausted! I have so enjoyed reading your posts during this A-Z blogfest. What to do next???