I titled my first manuscript Courtly Love. Each chapter referenced one of Capellanus' Rules of Courtly Love (also mentioned in The Courtier by Castiglione). It was, in my opinion, a smart title. Not only did each rule serve as a theme for the chapter, the overall message was that courtly love wasn't true love. In that book my hero and heroine learned that real love was gritty and uncomfortable, not all about show. Courtly Love was followed by Courtly Christmas, Courtly Marriage, and an intended (but never happened ) Courtly Consequences. All of them played on the reality versus the sophisticated ideal of their subject.

The big problem, aside from the apparently unpublishable nature of Tudor romps, was that none of these titles were in the least bit sexy. I took myself far too seriously. This advice was given by an author that I count as one of my favorites in the historical romance genre. She writes smart, strong, poignant stories all with a sense of humor and a decent deal of heat. I changed the titles to Courtly Pleasures, Courtly Scandals, and Courtly Abandon. Sexier? Yes. Published? No. Oh well.

I took the advice to heart for my next book, Possessing Karma. I didn't abandon my obsessive need for double meaning, but managed to make it have a sensual translation (my main character, Karma, gets possessed by ghosts, then in a more carnal way by Philippe. The ghosts are being punished by the force of karma, etc...).

I'm having real trouble finding a title I like for my Ireland book, currently titled Touched by the Past. Gillian returns to Ireland, where she'd spent a troubled childhood, only to find the memories she'd written off as dreams were real. She has a connection to the forest, an ageless elemental spirit of earth. The problem is that the forest doesn't the limitations of her humanity and she doesn't want to accept what is happening to her. The forest barrages her with memories, some recent, some ancient, and she has trouble determining what's real. She also reconnects with a childhood sweetheart who helps her accept the supernatural element and is her support in fighting a very mundane enemy.

I've brainstormed, looking for themes that are both mystical and sensual. I've come up with to know/knowing, bared by/baring, exposed/exposure, open to, touched/touching/to touch, taken, etc... It's driving me crazy. I keep hoping the title will come to me in a moment of inspiration, but no luck on that front so far. With RWA 2013 conference rapidly approaching, I want a gripping title to have on my one sheet (even though I won't be finished, so won't really pitch it -- more just have it with me to show that I'm actively producing)

Titles matter. They make the first impression. What sort of titles appeal to you when buying a book? Have you ever bought on title alone?
1 comment:

From the start my blog has been musings about the writing process. I share personal experiences, lessons I've learned from, and information from the romance industry. Occasionally I deviate with a blog fest or a rant, but I've been true to form.

I came up with Hold on to Your Bloomers in effort to not take myself too seriously and still have a hint of historical romance involved. I even had Doing it Elizabethan Style for a bit, but it grossed me out. Now that I've expanded my writing to include paranormal stories in modern day settings, I think I need a new blog title, if not a new blog identity.

Should it be creepy and dark? I don't think so because I still write with a sense of humor. My Elizabethans have been described as a romp -- I like to think my paranormals, while spooky, have an element of fun as well. I've been brainstorming witty titles, but nothing clicked.

I spoke to my husband about it and he said to keep it simple, but also make it something that will catch with search engines. He suggested Spock Writes Romance. Is it misleading? Do people expect a Star Trek homage? Maybe. But my last name is Spock, and it's the name people remember about me. It's also generic enough to allow for growth. Yes, I write romance -- so far just historical and paranormal, but who knows what lies down the road. Fantasy/Sci-Fi wouldn't be that big a leap for me. I have a few ideas from a young adult series.

For the record  yes, I really enjoy Star Trek (never got into Voyager though - 7 of 9 and the doctor were the only good things about that show). 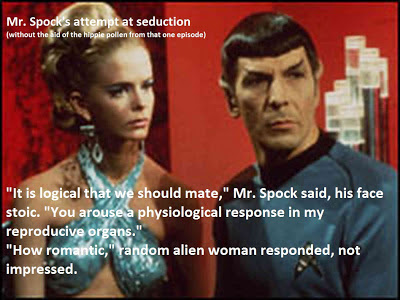 So, Spock Writes Romance it is. For those of you that have followed me for awhile now, please know that it's still the same blog. When it comes down to it, whatever the name, I blog about writing and the writing experience. Eventually it will include the publication experience.

Just for fun, click below to see the most amazing commercial ever. Every time I think about it, I smile.

Romance Writers of America's national conference is sneaking up on us. They have released the names of agents and editors who will be there and available for pitches. The list is in a handy little table, so I can check for those who represent both historical and paranormal romance. Really, I intend to focus on the ones I have not pitched to yet, so these ones are the unknown. This means research. 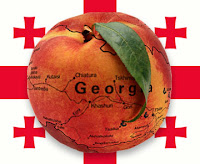 As I work my way through the list from Ahearn to Yost, let me mention that I really appreciate agent websites that include details about their client list. I can see what sort of product, at a glance, they represent. Yes, the table RWA provided has 'paranormal' checked, but if everything they have published is vampire series, chances are good I'm not within their scope.  Last year I had this trouble with inspirational agents. They didn't say anywhere that they were only for inspirational (Christian) books, but after looking up each author they had listed and reading about their books, I was able to draw that conclusion. I just wish I didn't have to spend so much time on each one before eliminating them as an option.

As a PRO member (a member that has completed at least one manuscript and gone through the process enough to get rejected) I am able to sign up for pitch sessions on 5/20 (tomorrow!) and this year I am aware that sign up starts at 9am central, not pacific. That was my bad last year. Oh well.

Along with signing up for pitch sessions, I'm using the information to create a stalking file. I go so far as to include pictures of my target agents, but I found last year that I relied much more on the name tags. It's worth it to know who the agents and agencies are and what they represent -- that way neither of us are wasting our time. I like to think that what I'm doing is not creepy and obsessive, but smart. Not weird at all. Okay, fine, last year there was one agent that had a bio mentioning something about riding bikes in Manhattan and I theorized about how I could hook her up with my brother (who also rides his bike in Manhattan -- relationships have been based on less), but I never actually did it.

This year I'll be armed with my one-sheets for four completed manuscripts. I want to be closer to done with my fifth, but even if I take up cocaine or something in order to cram it out, it wouldn't be clean and ready by mid-July. And I'd have a drug problem. Not worth it.

On that note I'm going to refill my coffee and get back to compiling my list. Cheers.

Side note: Don't Google for "Georgia peach" images if your kids are nearby. Just sayin'.

Something You Can Trust 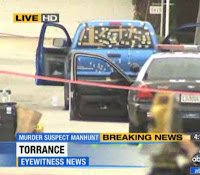 It seemed like all the events in the news this past year were aimed at rattling my faith in humanity (egocentric
much, Erin?). From citizens needing protection from the police, the Catholic Church more worried about its reputation than the congregation, teachers taking advantage of their position with students, even the highest offices in this country more interested in popularity than the good of America -- it all becomes too much sometimes. Who do you turn to when you can't trust anyone?

My easy escape is into a romance novel.  It's a place where men are honorable. Where love is important and family is everything. You are guaranteed laughter and tears. Happily ever after happens. Good is rewarded, bad is punished. Everything is right with the world. This is why I started reading romance in the first place. Real life has enough crap in it -- why read something that would make me feel even more hopelessness, helplessness?  Of course there is conflict in romances too, some more than others, but at the end everyone comes to their senses. Where does that happen in real life?

You may say it's not realistic -- but the characters in a well written romance can be as real and inspiring as the most lauded literature, only I know when I finish the last page it will be with a smile and sense of emotional well-being. There's enough turmoil and sadness everywhere else.
3 comments:

One of my very first blog post was about putting perfectionism aside and writing. I have to make the conscious decision not to get mired down into worrying that my first draft is going to be perfect. If I did, I'd end up with one really overworked chapter after a year of work instead of a new book.

You'd think that it would be part of my process, ingrained, by book five, but no. I still have to slap myself into submission and force myself to write forward. The story won't happen if I don't make it happen. At this stage of the game,t his is my biggest hurdle.

I'll worry about my passive language and overused phrases on the next round.

What is your biggest obstacle to finishing a manuscript?
1 comment: