A good friend told me her agent had once confided that he was not extroverted and found the conference scene intimidating. In order to cope, he developed a persona that went along with his image. It had smatterings of him so included honesty, but was a little bit more exaggerated. It makes sense. People who are skilled in the written word are often a little awkward on the spot.

On this, we discussed the image we would want to project. I had no clue. 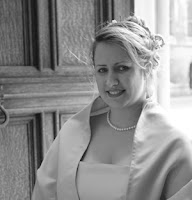 My friend had recently had head shots done. Since she was "edgy" for her genre, the colors were dark, minimal. There was no fluff, just an intense gaze and awesome hair. Also, given the genre, there were no visible tattoos.

But how would I project myself? The pic I use most frequently is from my sister's wedding seven years ago. I was pregnant and wearing lavender satin in a cathedral. I look classy, but is that what I want to say about myself?

Not really. Yes, I appreciate simple elegance -- but I think one of my strong points is my sense of humor. I describe my stories as a romp. Yes, there is deep subject matter, but a lot of laughter is involved. I write Elizabethan historical romance - complete with ridiculous humor that came with Shakespeare. I have role reversal, mistaken identity, bawdy humor, and fantasy. Short of picturing me in my Elizabethan court costume (which might seem a bit freakish), I don't know what to go with.

I had pictured something akin to the character of Penelope Garcia in Criminal Minds (to whom I have always related), but that would be an actual costume. I'm just not that cool. My friend, the edgy, dark, non-tattooed one, suggested I assume a sexy-librarian.

Hmmmm... The costume designer inside of me pictures a fitted suite with a leather bustier. Tweed with silk. A contrast in textures and attitudes. It's an interesting idea, but not important until I'm someone other than the pre-published writer of historical romance.

Do you have an image that you purposefully portray? Or what would your image be once you're published?


Off topic -- while searching for pics for this post, I found tons of Tina Fey (who I have frequently been likened too). It's the glasses. :)

Good question. I don't know what image I would want out there. It would definitely be ten years younger.

Our grooming style and dress surely reflects many a things about us!!

You must think about using this style!!

with warm regards
Another Author

I think about this a lot. I've recently changed all my website and blog branding from a photograph to a drawing because I couldn't get the photo right.

Whenever I go to a literary event I tend to opt for black lacy floaty stuff and, of course, my reading glasses. And I always say to my husband "Do I look 'writery' enough?"

Never discount the value of a bustier, I say. I think you ARE that cool and whatever 'look' you choose will highlight that brainy, sexy, fun aspect. :)
Edge of Your Seat Romance

The 'Mojo' character through whom I do most of my writing is certainly riffing on the actual me, but is explicitly modeled on various unreliable narrators and trickster archetypes encountered through my own reading.

As for how I'd *look* for branding purposes, in that alternate universe in which I'm a Published Author, I'd probably aim for Rupert Giles (of Buffy fame) but end up more Rupert Grint (of Potter fame).

Oh, P.S. Tag! Got some questions over at my blog for you to answer, if you're game.