Edward Da Vere inherited the earldom at the age of twelve upon the death of his father. His father had been royally screwed by the Dudleys into signing over ownership to many properties.  When Earl #16 died, Earl #17 was too young to inherit, so his remaining property rights went into wardship.

He was raised by William Cecil, who later became Baron Burghley. Cecil was not a loving man, but did value academics. Young Oxford was schooled extensively and became highly skilled in law (possibly so he could get his properties back).

At 21 he married Cecil's daughter, Anne. Anne, for whatever reason, wanted to marry Oxford. It didn't go well.

Oxford is quite a character. I use him in Courtly Scandals as my villain and in Courtly Abandon as my unwitting hero. He was many, many things, but I chose to show him as the brilliant brat prince. Entitled and bored. I grew fond of him while I was compiling a list of courtiers who would have been active at Queen Elizabeth's court between 1571 and 1574. He was there and within age range. I cast him as a minor but comedic character in Courtly Pleasures and it grew from there. 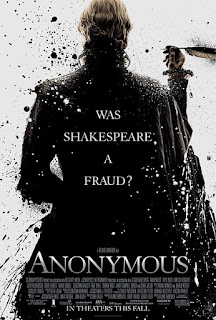 In the years I have been working on my Elizabethan books, Oxford has garnered more media attention. One of the current thoughts is that he might have been Shakespeare.  Yes, I have used that to my advantage.

I write this today because of a new movie coming out this year. Yes, Elizabethan period pieces come out from time to time, but this one is about (wait for it) Oxford!  This could be good and bad for me.  Good because I have a prominent historical character and a current person of interest as an almost primary character in my story and it might reach a larger market. Bad because tons of people may find him interesting and saturate the industry.  And my books are light romance,not heavy drama, so might not appeal to the same audience. Who knows? Either way, it's interesting and I can't wait to see it.

I cannot wait for this movie. We NEED to go and see it.
Edge of Your Seat Romance

Whoa - that trailer gave me goosebumps! Gotta see it...

Was it me, or did at least three of those guys look like Joseph Feins (sp?)