D is for Dammit! 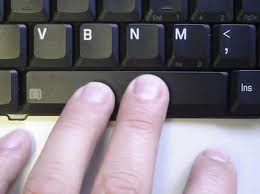 The good news is that I got a request for a full manuscript from a publisher. I'm pleased with the positive response, but this has happened before (different book, though). So don't get too excited.  I'm trying to hold the excitement at bay myself.

Anyway, the request included formatting guidelines so I finally broke down and changed everything to a single space after the period. Yes Andrew and Raquel, I did it. But it wasn't as easy as I thought it would be.

I did a simple "replace all" for all periods followed by two spaces to be followed by one space. Done? No. There are other forms of punctuation. So then another replace all for !  , ?  , and "  . Great. Done. Wait, no -- I forgot the ellipses. Done now? Yes. And thus,  Courtly Scandals joined the MLA formatting for the 21st century. God, I feel old.

So then I went and did this to my W.I.P., Courtly Abandon, and promised myself that, from now on, I would adhere to the stupid new single space rule. I save all my chapters in separate files, so after fixing chapters 1-8 I decided I needed to do a rank/precedence change to my potential-but-not love interest. The Earl of Kingsley stepped down on the totem pole to the Viscount of Kingsley after another 'replace all.' But I was foolish. I did not select the 'more' option and ended up with the following words scattered throughout my 8 chapters:
And, of course, Earl starts with a vowel... So then  I had to go through and fix all the 'an Viscount.'

After all of that, I whined to my husband and he asked why I didn't just do a replace all for all two blank spaces. Yes, I felt like an idiot. Dammit! Why is nothing easy?

BTW, it pained me to write this post using single spaces after periods. This transition is going to be tough. Old dog, new tricks and stuff.

I started my writing career on a typewriter, so I am a religious double-spacer. It was only recently when I read about this on someone else's blog and now I am slowly getting out of the habit of hitting that spacebar twice! Good luck with the MS.

You make me smile.

Congrats on the full request.

Wow, I thought the same thing as hub. I could have written a script to do all that for you, if it was that dang hard!

Congrats on the request! I hope it does come to something. I wish you good luck in replacing all those an's and viscounty's. And don't worry about the double-space-after-period thing. It seems impossible for a few days, then you can't imagine going back!

You certainly went about it the hard way. You could have just found two spaces and replaced them with one. That's what I did. Easy peasy!

Congratulations on the request from the publisher, I'll keep something crossed on your behalf.

Should it not work out, take comfort in Matt 7:6 - "neither cast ye your pviscounts before swine..."

Congratulations on your full request from a publisher. Sounds technically dreary what you're trying to do. I'm not a writer... just a writer groupie. :) You have a fun blog and good luck.
Manzanita

Yes, I realize I did it the hard way. I think I was hung up on the fact that punctuation was involved. Yes, I've learned my lesson.
Yes, I'm an idiot.
Thanks for the congrats. :)

Mojo, that was cViscounty genius.

When I commented the last time, I was at work, didn't read the whole blog (my bad) and now see your husband suggested the same thing I did.

Your find and replaces are hilarious, though!

But I also want to congratulate you on the request. That's great. It means you're on the right track. Good luck!

Good luck with the full request!

I had an advantage in retraining myself from two to one space -- I started working as a freelance copyeditor and proofreader, and that's how every single house wanted the manuscripts they sent me dealt with. So the necessity got ingrained fairly well.

Best of luck on the continued progress in the switch.