R is for Rickman

As in Alan Rickman.  Yes, I know it's silly, but I really dig on Snape.  Actually, it started back with Robin Hood, Prince of Thieves.  He was a great Sheriff of Nottingham,dark, funny, yet still vulnerable.  In one scene he is stalking through the darkened corridors of his castle and notices two peasant girls.  He stops, points to one, "You. My room. 10:30." Then looks at the second girl and says, "You. 10:45. Bring a friend."

I have read the Harry Potter books and never fantasized about the greasy, scrawny Snape Rowling describes.  I have seen the Harry Potter movies and Alan Rickman's Snape is a horse of another color.  It's not that he's sexy so much as dark, mysterious, and intriguing.  He's so lonely, I just want to give him some comfort.  Is that so wrong?  Perhaps.

Then again, I did not find him attractive in Love, Actually... so it must not be Rickman himself so much as the misunderstood villain.

So, in celebration of my weird little crush, I give you this cake picture.  I think the seventh candle was originally in the row on the right.  I don't know who Colleen is, but I'm sure she had a happy birthday and I hope she wasn't actually turning seven. 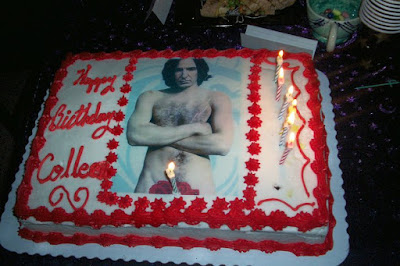 Truly excellent! It is his darkness, the tortured soul thing he project. Nummy cake.

Oh boy, I thought I may be the only one...I feel like you wrote exactly what I think about Mr. Rickman! I have had a secret crush on that guy since robin hood. All the other girls were all about Kevin Costner...gag. NO contest - Alan Rickman wins.

What about his performance in Sense and Sensibility...aww man I just loved it. My vote for best voice goes to him.

Wow. Just...wow. I did not need to see that cake. Although, Snape's pretty sexy.

Great post, by the way. I've never been a big Snape fan (Rickman's cool. I liked him in Dogma), but Deathly Hallows Part 2 will probably change my view of him. sniff. I'll definitely pack the tissues for that one. :)

If you like Dark Rickman... I wonder what you'd make of Closet Land...

Closet Land has now been added to my 'to see' list.

I enjoyed Robin Hood -- I frequently listen to the soundtrack while writing.