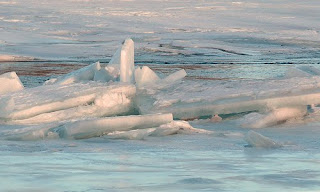 I'm excited to have something to contribute to another blogfest, this one, hosted by Mary McDonald.
This is from my WIP, Courtly Christmas. It is an Elizabethan era historical romance. There was a frost fair upon the Thames during the twelve days of Christmas. That was a fairly common occurrence. I used historical accounts and studies of thaw to try to lend realism. It is longer than 1000 words, and for that I apologize. I didn't think I could cut more and still have the scene intact. When I pasted it into my blog, it did lose formatting. Such is life.

Brief back story -- Mary miscarried years ago after falling in a river. She has some issues.

Mary clutched her cloak tightly around her body as she consciously put one foot ahead of the other, following the parade of gentlewomen. The ice seemed stable enough, but she could see that the bank was beginning to move ever so slightly – or rather, the ice was giving up its hold on the bank and starting the inevitable journey downriver. Speeding up her steps, Mary looked back toward the frost fair and saw the similar parades of people being herded off the ice on the southern bank of the river. A few of the merchants had to be forced from the ice, leaving their tents and wares behind. It was sad to think of the vendors – of the fact that they had come with hopes of selling their wares to the noble courtiers and, instead, were losing their livelihood. At least they were not losing their lives. Perhaps Queen Elizabeth would reimburse them for their lost goods. With a shake of her head, Mary dismissed the thought. Queen Elizabeth was not known for Her generosity.

Turning back toward her destination on the north bank, she was almost there, she caught a movement out of the corner of her eye. Turning her head fully, she noticed movement in one of the pavilions. The leather merchant’s tent. The little boy. Dear Lord, please let her get to him soon enough. Why hadn’t his family seen him to safety? He was no more than a baby.

Mary did not spare a moment for thought as she turned on her heel and moved quickly over the slick ice, keeping to the plank when she could. The tent was just shy of mid-river and very close to a break in the ice. Both sections were moving together downriver, but the ice on the south half was jutting slightly above its counterpart. She had to get off the ice right away – the southern half was larger and, as the river narrowed heading downstream, it was being forced against the portion on which she stood. She was no genius, but she could tell that the next step was for the ice to either splinter into smaller pieces or for the larger half to force itself on top and submerge the section upon which she stood. Either way, it looked bad for her. She must hurry.

Where was the child?

Over the roar of the river and grinding ice, Mary heard his plaintive wail. There he was – laying face down in the freezing wetness, gripping one of the ropes securing the tent. He looked up in surprise and fear as Mary bent over and scooped him off the ice. The boy clung to her like a lifeline, shivering and wet, his lips frighteningly blue.

“All is well, sweeting. Let us find your mother.” Mary crooned softly as she undid the ties on her cloak and swaddled the boy. He felt so small, fragile. He was probably not much past his first birthday – two at the most. Mary held him tightly against her shoulder, feeling him shiver through her thick cloak, and started back the way she had come.

With a piercing grind, the two halves of the thick ice pressed against each other. The current forced the ice downstream, compressing the thick slabs. Could they handle the strain? Mary took purposeful steps, struggling to keep to her feet on the unstable surface, to make her way to the north bank. No longer was she near the water-steps at Baynard Castle – the floe had moved downstream. If she ran, she might be able to jump over the crumbling ice at the embankment and reach the steps at the Queenhythe dock.

Clutching the boy tighter with one arm, she hefted her sodden skirts and tried to run. She had to make it. There was no other option. This little boy needed her. Step after step and she was closer. So close.

One more groan and then a shocking crack and her world jolted. The ice from the south had pressed on top and her half was tilting. Digging her toes into the sleet, she tried to press on, to scale the slope.

And then she was down, slipping – sliding toward the churning Thames that gushed up onto the ice as it was forced under.

Mary clawed at the ice with her free hand, desperate to find a hold. Something to save her. She could not die; she had to help the poor child. He deserved a chance at life. The ice was slick and, though the slope was not extreme, Mary found herself and the boy sliding inexorably toward the jagged ice and churning water at the gap. She had to find a handhold. Scrambling wildly, Mary gripped the first solid thing she encountered – a rope for a tent. Thank God the vendor had hammered a spike into the ice to keep his tent secure. She tightened her hold on the rope and offered a silent prayer of thanks as the ice crashed one more, this time buckling as it came to a jarring stop. She had to be strong – she had to hold tightly. The freezing water lapped around her skirts, trying to suck her down, but Mary held strong. She had to.

“Hand the babe to me.” Sir Charles’ voice cut through Mary’s fog of panic. Was he really here? Looking up, she saw him, his red uniform a blaze against the ice.

“How…” Mary tightened her grip on the rope. She could barely feel her fingers.

“The ice has stopped against the pylons of London Bridge.” Charles reached for her cloak wrapped bundle and Mary instinctively tightened her grip. “Let go of the child and I will see him to safety.”

Mary knew that he would, still it took every ounce of willpower she had to loosen her hold and let him take the boy out of her grip. The child let out a slight wail at the loss of her heat, but quieted quickly. Mary imagined that the boy knew he was safe – that he had been rescued by one of the Queen’s knights. Thank God. Mary again prayed, this time with joy. She had done it – she had saved the baby. All would be well; he would have a good life, cared for in every way. He would never doubt that he was wanted. Loved.

“Mary! Mary – open your eyes.” Mary could hear Charles’ voice. She was so glad he was here. He had helped her save the baby.

“Mary, I can’t carry you without your help.” Why was Charles so upset? The boy was fine. “My love, you must open your eyes. I need your help. Do you think you can walk?”

Mary opened her eyes to find Charles clutching her. They were still on the ice – how odd. She felt so warm.

“God’s teeth, Mary, stay with me. I cannot lift you alone. I need you to hold on to me.”
Wasn’t she holding on to him already? No – that was the rope. She could feel it biting into her palm, her fingers. If it wasn’t for the pain, she wouldn’t have felt her hand at all. In a rush it all came back. She was on the ice. Charles was trying to save her. She had to help him.

“There’s my strong girl.” Charles smiled as he leaned in to kiss her forehead. She could see the worry in his eyes as he lowered himself beside her so they both lay on the ice. He had a rope around his waist and, she could see, there were a number of guardsmen on the other end of the rope, standing on the ice wedged against the bridge. “Just hold on to me.” Charles’ hand was over her hand clutching the rope as he helped her to release her grip. “There we are. Now hold on tightly around my neck. I have you.”

Mary wrapped her arms around his neck as firmly as she could and held on for dear life. Inch by inch she felt them slide up the slope of the ice – the slope she had been unable to climb. It was painstaking. She could hear the guardsmen grunt as they tugged, then counted to three and tugged again. It was slow work – they must be heavy.

Mary almost laughed to think she was such a burden for three guardsmen, but then she looked down. Her skirts were soaked. Her legs must have been in the water – why hadn’t she noticed?
Again, she heard the count and felt the tug. She still could not feel her feet, but she could feel the ice shifting. They were running out of time.

“Faster!” Sir Charles gave a clear command and she felt the tugging again. How could she help? If only she was not weighed down…
Before the thought was fully formed, Mary was acting. She let go of her grip around Sir Charles and lowered just a bit to reach into his boot for his dagger.

“Mary, hang on!” She could hear the panic in his voice and gripped him around the waste with one arm as she quickly sliced through the waistband of her skirts with his dagger. With the next count and tug, she shimmied free of the burdensome sodden wool and felt the strength of the tug slide them further up the ice.

Charles laughed as he loosened his hold on her. “You are quite a woman.”

Two more pulls had them at the peak and able to stand up for themselves on the compacted ice against the bridge. Well, almost able to stand. Charles scooped Mary into his arms before her numb legs had a chance to give way.

Mary felt strangely warm again as Charles picked her up, clad only in her bodice, chemise, stockings, and boots. Charles had saved her. She had saved the baby. Mary felt like laughing. Like crying. Actually, more than anything else, Mary felt like sleeping.

Mary's quite the woman. You did a good job of creating fright, tension, and determination. In her place, I might have had a twinge or two of fear for myself. Good job. Roland

I love this scene. The urgency and the terror are all very exciting. I like that your sequence is packed with visual details and that makes it much more real to me.

I had hoped to make Mary so single minded in purpose that she did not event think about herself. I also wanted her to be proactive in the rescuing of herself so she wouldn't be "Save me, big man!" type of stereotype. Did I take her too far? Is she not believable?