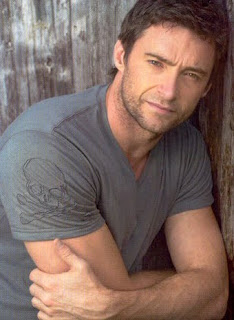 This blogfest, courtesy of Tina Lynn, was difficult for me. My hero's are Elizabethan Gentlemen. They are polite, even when they argue. So what to do? I chose an excerpt from Courtly Love. Henry is not a bad-boy in the standard sense. He's more of an ass, oblivious and negligent. I really wanted to reader to be cheering his wife on when she considers having an affair, but then end up falling in love with him. I include a pic Hugh Jackman because he was the unwitting male model for Henry.

This scene is the first time Henry has caught a glimpse of his wife at court. He thought she was still in the country.


Henry Pierrepont was supping amicably with Lord Howard of Effingham and the Earl of Sussex’s retainers when Lord Howard drew his attention over to the new Lady Howard. Glad to distract himself from the feeling of unease that had consumed him since his arrival at the palace, Henry began making the appropriate congratulatory comments. There was no real reason for Henry to worry – none outside of Walsingham’s inner circle knew of his role in uncovering Norfolk and Lumley’s treason. Discounting his sense of foreboding as pure paranoia, he joined in the manly banter with the gentlemen as they speculated about the three country gentlewomen sharing Lady Howard’s table. Sure enough, there were three handsome women laughing over some shared jest: two blondes and brunette – all obviously fresh from the country. Nothing about their appearances garnered Henry’s interest except for him to acknowledge their existence. The other gentlemen at Henry’s table were not quite so nonchalant about the prospect of new quarry among the stale ladies of the court. Henry, shaking away the last vestiges of apprehension, allowed himself to find their licentiousness amusing more so than offensive; he could not fault them – they made no pretense at being anything better than randy young bucks. With this condescending thought, Henry caught a glimpse of the fair haired bumpkin’s profile; it was all he could do to keep his stomach from lurching out of his throat in surprise.

It was as if Henry were seeing his wife for the first time. Although on an academic level he knew she must be twenty-four or twenty-five by now, in his mind she was still a pretty fourteen year old. Yet there she was, her eyes sparkling with laughter and her hair glowing in a halo with nothing childish about her. In stunned silence, he took in her smile, the rosy glow of her cheeks. What was she doing here? Was she here to see him? He should stand up and go take his place at her side…

“Henry?” Lord Howard broke through his reverie insistently. “Henry! Is all well?”

“Oh aye, forgive me. I was lost in my thoughts.” Perhaps Frances was the reason he felt that sense of foreboding. She shouldn’t be here. Court was not a safe place for someone as sheltered as she.

Lord Howard, obviously misinterpreting Henry’s distraction, clapped him on the back soundly. “About time you took interest in something other than your estate and parliament. You’re far too serious. There’s nothing better than having a woman warming your bed to help put perspective on things. She is obviously from the country – a soft word or two from you and she’ll be on her back in a nonce!”

Ha! The man thought Henry wanted to pursue his own wife. The potential humor of the thought was muted by the worry that perhaps Frances would be an easy target for a well-practiced seducer. Again he was hit by the sudden urge to go to her and publically claim her as his wife. It was clear no one present knew she was anything other than a tasty bit of fresh country meat. Henry started to rise… then sat down abruptly.

What if she wasn’t here to see him? Wouldn’t she have written if she had planned to visit? Maybe she didn’t want him to know she was here. But then why come to court? She must have realized that their paths may cross. Perhaps she didn’t care if she saw him or not. What an insulting thought. Then again, why should she care to see him?

Lord Howard was looking at him inquiringly. “Well man? Are you going to do it? Better be quick before these other young bucks take up the chase.”

Henry was beginning to find the ridiculousness of the situation funny. “But what of my wife, my Lord? “

“You have a wife?” Lord Howard raised his eyebrows incredulously. “Poor woman. What, do you keep her locked away in the country? Is she slow-witted or homely that you would hide her? I take back my suggestion – you do not deserve that delightful creature over there.” He gestured to Frances. “You need to high tail home and do you duty. In the meantime,” Lord Howard rose and reveranced his farewell to the gentlemen at the table, “I will happily see to it that I do not shirk my own.”

Henry laughed lightly at the conversation. And then grimaced, then laughed, sighed and took a bite of his pudding. Lord Howard’s assumptions had been wrong: Henry had never done anything but his duty. He had married the girl he was told to and got a child on her in spite of how awkward the experience had been. He had arranged for the Pierrepont estate to be comfortable. He had joined parliament… he was so dutiful it made him sick. But in respect to Frances, that’s all he had ever been. Honestly, he wouldn’t know how to have an open conversation with her. She intimidated the hell out of him.

Lord Howard had been right on one point thought – he had kept her holed up in the country. He had never offered her the option to do anything else. Of course, doing so would have involved talking to her about more than household accounts and tenant farmers… the thought alone made him feel like he was still the ungainly fifteen year old boy who had been confronted with a pair of breasts attached to a wife.

His appetite gone, Henry pushed his trencher away and rose. He crossed the hall, his sights set on his wife. Should he be charming? Witty? Should he even bother with a façade? What was the point? They were already married – it was not as if he had to win her favors…

Henry’s thoughts were interrupted by the sensation that he was being watched. That he was in danger. Scanning the hall he could see no obvious threats – still, he was uneasy. More than that, he felt almost sick. He took a step forward and the feeling intensified. Something was very wrong – something more than his wife’s unexplained presence: that explanation appeased his prickling intuition, but he knew better than to try to rationalize an otherwise irrational sense of imminent disaster. While not a superstitious man, Henry had survived in the Walsingham’s service by trusting his instincts, and, at that moment, his instincts told him that he should leave the palace at Hampton Court for now. Frances would have to wait. He prayed she would be able to take care of herself.

Henry is more of a honorable spy than a bad boy. But the danger in the background makes something bad certain to happen soon.

You caught me up in the moment, tension, and focus of your hero. Bravo. Great job.

Thanks for dropping by my blog and leaving a comment. It does make one feel better to read them, doesn't it?

Thanks for commenting! I enjoy your blog. And it's true, I read you more often than I comment. I will make a point to comment more.

You're right -- Henry is not a bad boy. But he has been neglecting his wife for 10 years, which sort of makes him an ass. He manages to redeem himself, though.

Oooh. I'm interested to see what happens when he DOES finally claim his wife! Bad boy or not, I was drawn in, and I second Henry's hope that she can take care of herself!

THis is so great. I hadn't read this before and Henry seems like hes redemable and a bit wayward. Great Choice!

Henry is an interesting, mysterious character. Seems like a guy that fate messes with. Not a bad boy, but someone I wouldn't mind getting to know in a novel.

And Hugh Jackman looks; yeah, got my attention.

"Lord Howard of Effingham"...How could I resist? :) Nicely written, I like this scene and also Henry despite his issues - bad-boy but still likeable.

Wow!! Do you know how long it's been since I've read a Regency Novel?? LONG!!! You've just whetted my appetite, thank you!!! :D

Btw, I thank you for making Lord Howard a moral creature rather than suggesting to Henry to take Frances up as his mistress--great one!!!!

I would love it if you came by and told me what you think of my bad boy! ;)

I like Henry. Geez, I'm glad wives aren't kept holed up in the country anymore! But back to your bad boy, I'm intrigued by the spy aspect and am curious about the source of his affliction, did someone poison him or is it intuition that something bad will happen if he doesn't hightail it and leave his wife to the wolves? That kind of bothered me (that he left her behind).

I LOVE the title of your blog!
Thanks for sharing this snippet, Olivia
Please let me know what you think about my bad boy if you make it by. :)

Quite an excellent literary exploit my dear. I do fear you tread into the dark waters of "telling" versus the more exemplary "showing" construct of the written art, and your lucid voice sometimes ranges into the more modern colloquial forms, however the body of your tale is most intriguing and I do wish to pursue more of the pleasure of reading this brilliant tome.
Bravo!