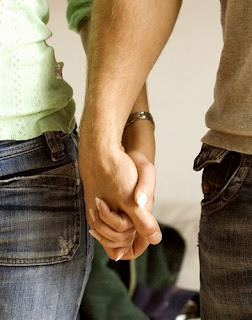 A while back, I was a judge for my school's district level History Day competition. During a break, I excused myself to use the restroom and stumbled upon some tongue locked, groping teenagers (who I had just interviewed about Japanese Internment camps). These kids were in the hallway outside a bathroom, not terribly romantic. He was just happy she was letting him touch her. She was ignoring his BO and imagining what it would be like if they were on a bear skin rug in front of a hearth in Aspen and (subconsciously) basking in her power over males. But on top of it all was almost palpable desire. They were horribly embarrassed (so don't make out next to the teacher's bathroom, idiots!). I wasn't embarrassed so much as giggly and silly. They were so awkward and spastic and desperate. I remember public make out sessions when I was 16. And the thing about it wasn't that it was necessarily a sensual smorgasbord, but it was exciting and new. Each little step along the path toward the inevitable losing of virginity was part of discovering the unknown. Add that to out of control hormones and those teenage years become just a crazy randy blur.

Now I'm all grown up, if you use years as a guide. The hormones are much more stable and I've been there/done that when it comes to the spectrum of more traditional sex. So, the anticipation of wondering if he'll try x, y, or z and/or if I'll let him, or of trying to make time for trying anything during the 20 minutes between getting off the bus and parents coming home -- that's all gone. And it's not coming back.

I look back on this because I think this is part of the escape of romance novels. Whether the heroines are innocent virgins or courtesans discovering love for the first time, it always has that passion and anticipation that is part of a new relationship. That is not saying that I want a new relationship, but escaping into someone else's psyche, even for a few pages of a book, helps me relive the days when I shaved my legs regularly, just in case. The protagonists in the romance genre have such a strong chemical attraction that they can't keep their hands off each other. His burning gaze ignites a fire in her belly. Her every intake of breath makes his self control quaver. That is Romance novel passion: it's also teenage passion, and, as I sit here in her sweat pants and bleach stained maternity tank top (my last pregnancy was over 4 years ago), I remember. The leading lady is not wondering whether she's ovulating or embarrassed about her cesarean scar -- she just aches to have him touch her breast. He's not worried about the mortgage or the fact that he just had his burger animal style, he wants to taste the rose-petal and honeyed softness of her skin -- and she's so consumed by passion that she's not self conscious or wishing she had bathed first. Romance is an amazing escape from the mundane. It helps us remember the idealism of passion from when it was new.

I agree that romance is escapism. I mean, gorgeous ex-cop turned private detective chicks, rich dudes that crave women their own age who are smart. Near death experiences that result in breathless kisses, not asthma attacks. These things I don't often see in reality.

Romance is how we'd see the world if rose colored glasses were real. They are our ideal relationship; breathless anticipation, lingering gazes, an emotional connection that drowns out everything else in the world.

You're right...that is teenage love.

As a former teacher, I, too, have had my encounters of students caught up in the storm of hormones. Puppy love is real to the puppy. And first love happens only once -- even when viewed through memory, the impact is altered by the perceptions and lessons time has taught.

Happy to have found your blog, Roland

I love your blog!

Thank you so much for the great responses.

I think I'd get some parent complaints if I had the kids write a romance scene. Of course, I wouldn't get parent complaints from the parents of students that would take it too far because they'd never know and they really should. Still, I love the idea.
Not only would it be short, it would be written in text speak with no punctuation.

I agree that puppy love is true to the puppy. In fact, the puppy love I remember was free of any doubts or reality checks. Love was going to conquer all and happily ever after was an exciting prospect.

Look at all the Twilight crazed teens today as they strive for that love of epic proportions. That soul-mate experience that is worth dying for. It's defining, it's exciting, and it's really stupid. That said, I'm glad I can't go back and slap my 16-year old self for being too idealistic.

(For the record, I am not criticizing Twilight, I'm analyzing the hormonally charged teenage mindset)