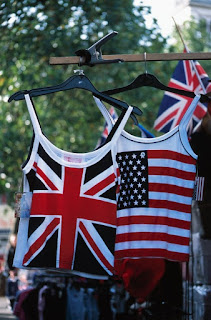 I am an American. More specifically, I am a Californian. Apparently, the Californian accent is considered the non-accent of all the states. Most words are pronounced here as they would be phonetically described in the dictionary.


The only negative with writing in my California voice is that we Californian's tend to be very casual in our speech (and everything else – I’m not wearing pants, by which I mean trousers, right now). This is something I really pay attention to when it comes to my character's thought process and dialogue. They are, after all, English and living their stories over 400 years ago. So I am careful.

Now, my own personal quirk when it comes to speech and spelling is that I did live in Ireland between the ages of nine and thirteen. This left me with some, by Californian standards, screwy spelling and language. I still call big trucks 'lorries' (it's always the first word I think of to describe them. This is what my kids now call them, too). I write 7 and z funky. I tend to add an unneccessary 'u' to words like 'color.' I pronounce either as 'eye-ther' instead of the US 'ee-ther.'

Okay, so where is this going?

I recently had a critique where I mentioned an armoire (ar-mwah), which is that big piece of furniture you buy that (in California, people usually keep a TV in it) can be a stand alone closet. I know that in England, they call it a wardrobe. I also referred to the season of 'fall' (US version) instead of ‘autumn’ (UK). It was recommended that I change the Americanisms in order to serve a broader world market.

So, here is the question: I am an American, writing about British people. Chances are that if I ever when I get published, it will be in the US. If I stick to US norms, am I limiting my reading audience? Should I be thinking about this as I edit?

By the way, I’m thinking the lead characters of my next book will be Fanny and Willy. :)

I think if Pride, Prejudice, and Zombies can get published...you're okay with a little Cali-accent going on.

By the way...there's a "Secrets" Blogfest over at Midnight Ink.

In case you wanted to participate.