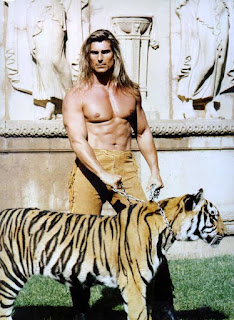 Okay, so what's my point? Fabio's message about loving yourself before others can love you is one of those universal truths that women, in an era of self-deprecating jokes and size two models, forget. My stories have running theme of self-love -- not that type that makes you blind, but the type that offers healing and and optimistic future view. So, on that note, thank you Fabio.

That is so true about learning to accept oneself before expection others to do the same. So hard to write though.

Have a Fabio-lous day today! ;)

P.S. There is a Terror Tuesday Blogfest you might want to check out. Your ice scene would be awesome!

Wow! haha! That's an awesome story! And actually, that was really cool and generous of him to wait and give you guys an autograph.

Definitely an awesome Fabio message to have gotten as a teenager, too. I mean, talk about the time that we girls struggle the most ever with loving ourselves!

Loved this story!!! You guys were so clever to throw a Fabio Xmas for your mom - that just cracks me up. I could visualize the whole scene - you are a great writer, Erin!

Thank you! And thanks for following my blog.