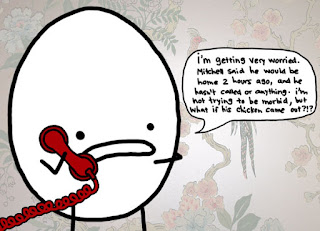 Thank you to Francine at Romancing the Blog for hosting this blogfest. As soon as I read the description, I knew what I wanted to post. Unfortunately I have not yet written that scene. Well, I have until October 2nd to finish it!

Blogfest Description:
At some time or another, I expect you've all had to convey bad news to someone else, maybe to do with a pet, a relative, maybe even lover. Hence, this "Bad News Blogfest" is not about personal misery, it is to be about a character receiving bad news!

It can be written in any genre, any POV, any means of delivery i.e.
letter, e-mail, text, phone, verbal, whatever, and up to 1000 words.

Addendum: My blog actually posted like this, this morning. I completely forgot to update it. Thank goodness I was awake and online when it happened. Updating now.

This scene from Courtly Pleasures is the only thing I have written that would work. In this scene Frances learns that the man she's been fooling around with is actually her husband. Sorry about the length -- I couldn't really cut it and have it still make sense.

“We are most pleased to know Our little scheme did meet with success. Our dear Henry has proven himself quite the rake. We are blessed indeed that he has not made a play for Our heart!” General laughter ensued at Queen Elizabeth’s comment. “Our dear Dr. Dee has confirmed that you are reunited and We are feeling gracious towards the ideal of young love. Your rooms have been reassigned. Henry LeSieur is to be moved from his apartment at Parliament to your new quarters here at the palace posthaste until such time as you feel need to return to the country.” The queen raised one well shaped eyebrow and flagrantly eyed Frances’ form before winking to reinforce the not-so-private private joke. Frances appreciated that Queen Elizabeth’s merriment was sincere, though somewhat embarrassing and completely surprising.

“Yes, We are pleased. Come now Frances, I see you are in shock. No need to thank Us – the true marital happiness of Our beloved subject is thanks enough. We have never had much faith in the ideal of marital bliss and, perhaps, you and your loving husband will prove Us wrong.” Frances responded with a mute reverence and a dumb smile. “We do congratulate Ourselves on a job well done. Well done indeed.” With an audible sigh of excited happiness, Queen Elizabeth absentmindedly offered her hand to the side for one or another of the observant handsome courtiers. Kit Hatton, surprisingly giddy for a man who had lost any opportunity for dalliance with the woman he had been pursuing the past couple of months, lithely stepped up to assist Queen Elizabeth from Her throne and on to the floor as she called for a dance.

Frances remained paralyzed in front of the dais as the dancing began behind her. Just earlier that day her mother had unexpectedly arrived, bearing the news that she and her husband had reconciled with each other. She did not know what was more upsetting – that it was common knowledge that she and her husband held so little esteem for each other, that there was a rumor they had separated, or that the Queen Herself believed that something romantic had occurred between them at the pirate masque. After all had been explained to her mother, it occurred to Frances that perhaps the Queen was aware of her dalliance and sought to keep her in check by putting her with her husband. But no, her mother had not thought Queen Elizabeth would worry Herself with something like that as long as Frances wasn’t playing the strumpet publicly. Then again, why was the Queen concerning Herself with Frances’ marriage at all? And to take such a public position – as if the supposed reconciliation was part of some little scheme. Very odd.

Frances felt a pull on her hand and allowed herself to be led off the rapidly filling dance floor. Insipid smile still pasted to her face, Frances blinked her eyes to focus on her Mother. “You did well enough, though I can see you are reeling inwardly.” When Bess received no response other than Frances’ false smile, she continued, “Wake up, child! We are at court and you need to comport yourself with due consequence.” Frances jolted as her mother pinched the back of her hand. “Better. Now, come with me to gather your wits before you have to see your ‘loving’ husband.”

“He is here?” Of course he was here. Hadn’t the Queen just said She had summoned him from Parliament to join her in their new rooms. Good God! He was here! She had managed to be a very public figure at court for almost two months without ever catching sight of her husband – and now she was to share quarters here in the palace under some façade of being young lovers? This was ridiculous. Frances had come so far since leaving Holme LeSieur – she knew she had. She had come to court an insecure country bumpkin and risen to become a respected, creative, well liked, and sought after courtier. But at this moment, surrounded by the constant motion of chains of courtiers dancing the Montard indefinitely, Frances felt like the child bride overwhelmed by responsibility and crushed dreams. He was here. It was over.

Well, it was only ever going to last through Christmastide – but it would have been nice to end it all on her terms. Henry. Frances felt sick at the thought of lying under her husband and knowing how wonderful it would have been if she were, instead, in the arms of her lover. To have to dutifully smile and accept the dispassionate attentions of her husband’s marital duty was heartbreaking after feeling desired and beautiful in another man’s eyes.

“Lady Mother.” A deep voice sounded from just behind Frances.

Bess of Hartford looked up and allowed the briefest glimmer of surprise to flicker in her eyes before replying, “Henry,” in a politely gracious tone and gesturing for him to recover from his reverence.

“My Lady Wife.” Her husband’s voice continued, forcing Frances to acknowledge him. Funny, she could not remember ever noticing how deep his voice was before.

Frances no longer had the luxury to bask in her shock and dismay. The time had come for her to play her part. With a regal set to her shoulders and a smooth brow, she gracefully turned to give her husband a proper reverence in greeting.

“My Lord Husband.” Frances’ voice was even and steady as she dipped into her reverence. She was a gentlewoman and accepted at court. She was intelligent, attractive, and strong. She could do this. Bravely, she raised her eyes from examining the point of her claret satin slipper to look up at her husband. Slippers, hosen, paned slops, quality velvet and silk, smooth fitting doublet, rakish cape over one shoulder, smooth cheeks – he had shaved since she last saw him.

She could not break her eyes from his. It felt as if a bolt of lightening had just struck through her entire body and welded her to the floor. His thick fringe of lashes did not blink as her pale blue stare held his. God’s teeth. What was she feeling? Desire? Anger? Fear? Anger? Surprise? Anger? Yes, definitely anger. Anger was something she could understand and use. If only she could break her eyes away from his.

“I see there is more here than I expected. I will leave you two love birds alone. They are starting Gratia d’Amore. Do join the dancers. This revelry is in your honor.” Bess’ voice seemed so far away.

“No Mother, it is unseemly for a husband to dance with his wife.” Frances’ statement, while true enough, was seen for what it was – a weak attempt at escape.

With that, Henry LeSieur took his wife’s hand in his and guided her onto the floor in time to start with the opening riverenza.

Each pair of dancers moved from the opening riverenza into a seguito ordinario, turning away from their partner and then back in full circle. That measure of music was all Frances needed to compose herself before meeting the eyes of her husband. Her lover. How could she not have known? Henry, the boy she had known for ten years. When had he changed? Why hadn’t she seen him for the man he had become? But then, if she had, would it have mattered? Certainly not to him. Steeling herself with anger again, her eyes bravely met his for the continenze, she opened her mouth to speak – still unsure what she should say.

... Needless to say, it doesn't go well. Until it does. Because all books in this genre have a happily-ever-after.

Oh, very nice twist in this tale and good atmosheric leanings in what is essentially a relatively close society: courtly etiquette and all!

Oh I love that Henry just swept her onto the dance floor, ignoring her protests. ;) Really enjoyed your entry and would definitely like to read more!!

this is very evocative and absorbing!
I only had time for the genre Mash-Up Blogfest this week...

Good imagery of an era.

She's feeling anger toward her husband. You know what they say, anger is love's bedfellow, right? I loved this piece! :D

The voice really pulled me in on this one. You can feel how trapped she is.

Yes, this is really well-done... I want to know what he says to her since he knew the truth all along!!! And I must admit, I don't mind a little friction when I know there's a fabulous happy-ever-after awaiting my characters. Ahhh...Romance!