Boo-fest: Not Quite a Ghost Story, But Close 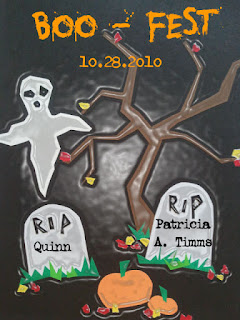 Thank you to Quinn for hosting this boo-fest. The idea is to share a ghost story -- either a personal experience or a retelling of someone else's experience.

The thing is that I am really afraid of ghosts. I'm fascinated by them, want to learn more, drawn to haunted houses, but they scare the bejeebers out of me.

The Sixth Sense bothered me for months. MONTHS. I slept with the light on. All of my weirdo childhood hangups resurfaced -- like not being able to sleep with the closet door open. Being alone at home with any light off in the house. It was bizarre and my husband had no idea how to handle it. That was the first time he found out about my ghost problem. I still have issues when I remember the vomit girl or the mom in the kitchen. *shivers* Let's not even talk about The Shining.

We moved to Ireland right before my tenth birthday. My grandparents had bought a hotel and my dad and uncle were going to manage it. I knew the hotel had been a hunting lodge, but had no idea of what that meant. I knew it was surrounded by woods, but my Southern California based prior knowledge could not comprehend it. Not really. I was not prepared for the creepier aspects.

I remember the flight and meeting my dad at the car. The next thing I knew, I was waking up in an unfamiliar hotel room. Room 18. I was in the middle of a huge, four poster bed. The type of bed so high off the floor that you should have a small set of steps to get in an out. I was tucked under a purple, velor blanket and alone. I had had all sorts of fantasy's about moving from Victorville to Ireland, all very princess-y and magical. This almost counted -- except the room was small, cold, and damp. My blanket, while probably very nice years ago, was patched and had a musty smell. The window looked out to an overgrown hill that was so steep and high that I could have reached out and touched the gorse from my second story hotel room. The overwhelming green outside filtered the light into a dusky gloom making the shadows that much more intense.

I remember climbing out of bed (there were no stairs) and going out the heavy door -- the type of door that took a big, fat key. Directly across the hall the door to room 17 was open. My Mom, brother, and sister were napping in there. We were all waking up from our jet lag. Their sleeping arrangements were less spectacular. Dad had chosen my once impressive bedroom for me on purpose.

Rooms 17, 18, and 19 were at the end of a wing. In order to get to these rooms, you had to walk down a long corridor. To the left were broad, shuttered windows with a view of the slate roof. To the right were inset cabinets that hosted the hotel's linens. 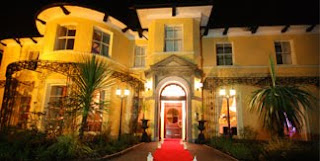 I still have bad dreams about walking down that corridor. The dreams are set both in daylight and at night. There were other portions of the hotel purported to be haunted, this wing disturbed me. I always felt watched. Really, it was a very well lit corridor, but the windows open to the first floor slate roof gave a feeling of being exposed. Vulnerable. Of course it was worse at night -- when you looked out the windows and only saw your reflection in the glass against the expanse of dark. 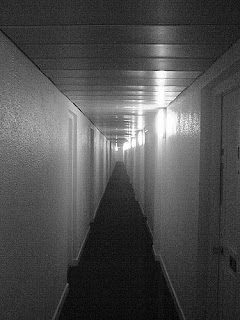 My most recent dream I was with my husband, two daughters, and brand new baby (I don't actually have a brand new baby) . We were in the room in the main hall that faced that wing with rooms 17, 18, and 19. I opened the door and could see down all the way to room 19, the light streaming in the windows against the glossy white cupboard doors that flanked the corridor. I felt an inexorable pull as if I was being sucked toward that hall that went on forever. I knew I had to get my family out of the hotel or it would never let us leave. My husband actually believed me and helped get the girls and I went for the baby, but the hotel had already taken her. I woke up crying, my heart pounding.

I know, this is not a ghost story in the traditional sense, but I think it is a close cousin. I cannot wait to share Ireland with my family and revisit memories, but I don't think I'll ever be able to spend time in that part of the hotel.

The sensation of being watched and followed is worse than actually seeing something. So, I think this qualifies as good a ghost story as any.
Nancy
N. R. Williams, fantasy author

Creepy! The idea of anything paranormal in a hotel is especially scary.

I'm hosting a Halloween Haunting at my blog "Substitute Teacher's Saga" if you want to join in. There are prizes!

I could understand you not wanting to visit that hotel again. The feeling had to be strong for your husband to believe you even in your dreams.

yikes! I'd say that pretty much counts as a real life haunting story!

I would be tempted to go back to try and figure it out. Is there any meaning you could figure out surrounding the new baby? Feel free to not answer that if it's too personal.

Dreams and ghosts are very similar, I think. I like this ghost story. Thank you for participating! Like Quinn, I would want to figure out what's calling you back to that hallway. It's interesting too that you are from Victorville. My sister when to Victorville High while I attended Hesperia High for a couple of years before moving back to Utah. I've been back in Southern California since 1997. Great job on the post! Very good story.

I am officially creeped out. That was a great ghost story...love your description of the Ireland gloom.

Dreams can be as scary as any ghost experience. This was a good story, thanks for sharing!

Thanks for all the feedback! My parents managed that hotel for three years. There are a lot of fond memories there and it was all during a very formative time (I was thirteen when we moved back). I will return someday and maybe the dreams will stop.
As to the newborn baby -- no clue about the significance there. I suppose future procreation is not impossible, but it's not probable. The baby probably had more psychological relevance, a symbol of something. After all, I wasn't able to save it.
Feel free to analzye. :)

Now I have to get over and read the rest of the entries. I'm looking forward to everyone's stories.

Dreaming, I think, sometimes, is as real as seeing apparitions! After all, the subconscious sees and logs things the conscious mind often overlooks, but aspects of logged facts do trickle through from the subconscious to the conscious! Hence dreams remembered as vivid as if the event just happened. It's fair to assume that in the 21st century, we as humans have lost many faculties/skills our ancient forebears took for granted, not least acceptance of knowledge in how to survive in the basic sense of survival and of reading signs to guide in every day life, re weather patterns, animal instincts etc. ;)

For all our modern technology and educational learning we're pretty thick in comparison to those who lived pre hundreds of years BC.

*shudder* This is some real nightmare fuel. Lol. I'm totally creeped out.

I love your descriptions. And definitely creepy enough to be considered a campfire tale if not a traditional ghost story.

Oh I know what you mean about the strange feeling in the house.

The house I grew up in never revealed any of its ghosts although my entire family believed (quite independently) that it was haunted. Particularly the portion where my brother and I slept.

It just always felt like something scary was about to happen.

I learned two things: how to fall asleep with lights on and stay asleep; and how to orient myself to look away from the door, no matter when I woke up.

I was that convinced that something would be there if I cared to look.

At that stage I was too scared.

Nowadays, I really regret that I didn't face my fears.

I didn't write about my true ghost story because I knew how terribly frightened and uneasy many get at the thought that the dead walk among us.

A drug informant was murdered in my apartment complex -- appropriately in #13. Most of the residents claim to have heard heavy footsteps shuffle along the front or back of their apartments.

A few have heard heavy knocking with a whispered "Help me" only to open the door with no one there or anywhere outside.

I never have. But my cat, Gypsy, has her nightly throne on the front window and every so often hisses and growls low in her throat as if at an hostile cat -- though no other cat is in the small complex.

Perhaps Gypsy is protecting me.

My favourite story about a haunted hotel room is Stephen King's 1408, which was made into a film starring John Cusack. What a deliciously convoluted plot that was!