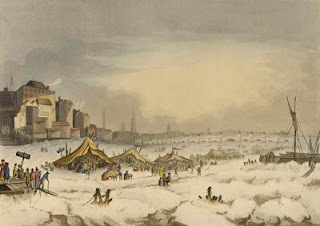 Thank you to Brenda for hosting this blogfest. The premise:


Here's how it works. On your blog site, write a new scene or post a scene from your current project that is no more than 500 words, which has a rocking cliffhanger (pun intended). It can be any genre. Just leave us hanging, craving more, and cursing your name for making us want to turn a page that isn't there. Easy peasy, right? Right.

This is from my rapidly concluding w.i.p., Courtly Scandals. There is frost fair on the Thames and my mc, Mary, has just noticed that the ice is shifting. POV has now switched to Charles, the male lead as he notices the same thing. Charles, a member of Queen Elizabeth's Yeomen of the Guard, is on duty as escort to the Queen and Her party. This scene ends chapter 13.


Looking up he caught the eye of two more guards men and signaled them to him. What was the best exit strategy? If the ice was not secured against the bank and the entire fair shifted the weight on the river, it could crack or worse. He would have the guard split into two groups, escorting citizens and courtiers to either side of the ice. He would ensure the Queen’s safety.
“Sir Charles.” He heard Mary’s voice registered and he turned to find her right in front of him. Oh God. She had to get off the ice. Now.
“The ice,” Mary stammered through chattering teeth, “The ice is not safe.” Looking into her clear green eyes he saw her trust. He had to trust her, too.
“You are right. My men are already beginning escorts to either side of the river. We cannot panic and we cannot rush to one side. Do you understand?”
Mary calmly nodded. “I will join the ladies again and help keep them calm.”
Charles was relieved at the resolve in her eyes. Mary was a strong woman. “Thank you. I must go to the Queen. Now.” His reverence was almost imperceptible as he ran to the Queen’s side.
Again, Charles gave the briefest of reverences and removed his hat as he approached the Queen. Time was of the essence. “Your Grace, we must leave the ice now.”
Queen Elizabeth took in the situation immediately and moved toward the water steps at Banard Castle as Sir Charles directed. “You will see to it that my subjects are seen to safety as well.”
“It is being done as we speak.” Sir Charles could not help but admire the Queen’s ability to remain calm and smiling in the face of potential disaster. She held a tight hand on Dudley’s arm, but never betrayed any sense of urgency or fear.
Sir Charles had the Queen and Her immediate court safe on the watersteps when he heard the ominous groaning sound of the ice straining to hold, followed by a resounding crack as the glossy surface of the Thames splintered into jagged sections, jostled by the current. The court was safe and, he could see, his men across the way had the merchants and other patrons safe as well. Out across the icy expanse of the river he noted the merchant’s pavilions teetering on their unsteady ground. Many people would be loosing their livelihood this day, but thank the Lord that none would loose their lives. If it hadn’t been such a sad sight, it almost would have been comical to see the bright colors of the canvas tents bobbing slowly downstream. In fact, there was the leather merchant’s tent…
Charles’ observations stopped dead. There, next to the leather merchant’s tent, was Mary, bright in her red gown against the starkness of the ice, clutching a small child.
Duh-duh- DUHHHH!
Obviously the scene prior to this cut is much longer. I don't know if it has the cliffhanger aspect as much without any background about Mary, but it will do in a pinch. :)

Have to love Mary's courage. You painted the scene masterfully. You left Charles and the reader up in the air. A great cliff hanger.

Good characters, and interesting setting. Thanks for sharing!

Lots of great things for me to picture here and characters that would keep me turning the page!

This is a very interesting story. You paint a very good picture. And I really, reeeeally want to find out what happened next! Thanks for sharing!

Oh! Great setting! Would love to know what happens next!

This is really nice i wish i had entered now. good job I cant wait to read courtly pleasures now. You had me at Thames

Very nice! I love historical stuff, and this drew me right in. I've heard of the markets and festivals on the Thames, but I've never read a scene on the ice before. Great idea!

The red dress against the ice did it for me. So full of tension and the cracking of the ice made my skin crawl with dread. Great post!

No, don't worry about the background. You did a good job of creating the characters and that's more important. You're a good writer. I love the voice. It seems perfect for the period.

Great scene setting here, the imminent danger apparent and definitely has one on the edge of seat wondering who is going to perish! And the heroine, oh God, will she or won't she make it to safety? It's a cliffhanger!

That works for me. It has the emergency, the character, and the moment. It's interesting to see stories that have more than one point of view even though in the scene we are just given one of them (which is for the better anyways). Good job!

Yep, I like the red dress too :) Thanks for sharing.

Thanks for participating! We've judged your entry. o/\o *high five*

You set the scene very well! We get the sense of danger as well as Mary's courage. Great characters!

I enjoyed your characters and even the queens strength was wonderful. Your setting seemed to fit well with what you were bringing across to the reader, and I think it works for the blogfest. :)

Great! I could visualize the red against white, and felt the urgency completely.

Thank you to all the comments. I was not able to make it over to Brenda's site in time to vote, but I will still make it through all the entries eventually. It just may take a week. Or two. There were a lot of entries.
Brenda, you had a very successfull blogfest. Congrats!