Just When You Think You Know Someone... 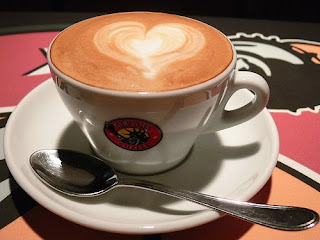 A few weeks ago my mother and I went out for coffee. The baristo was an attractive 20ish hot guy. He was funny and flirtatious and I assumed he was gay. My mother disagreed.

Eventually I decided he was not gay.

Is that important to the story in any way? Not really, except that it demonstrated that we both noticed him and discussed him.

Now, my Mom is about to turn 60. She's from the Mid-West and has the Mid-West fascination with ailments. Hers. Yours. Doesn't matter who's. Just don't ever ask her how she is or she will REALLY tell you. How about I tell you now and save her the trouble? She probably has, just had, or is about to have a migraine. Her colon is spasming and you should really have yours checked out because you never know. Then there's something random, edema, UTI, shingles, something. My Mom can also tell you date and cause of death for any celebrity. It's almost a super power.

By the way, I write this secure in the knowledge my mother will never read my blog.

So, knowing my mom and her dark and gloomy perspective on everything, I was floored when she put a couple bucks in the tip jar and made the universal telephone hand gesture to the attractive-not-gay baristo, and mouthed, "Call me." He busted up laughing and I almost died of shock. I do not have the words to express how shocked I was. Speechlessness interrupted by intermittent laughing fits. It was amazing.

The point of this story is that real people are multi-faceted. We all know this, and yet we still categorize and try to put people into neat little character boxes that we understand. As a writer, I have to be careful not to do this or my characters become too archetypal. That, in part, is why I run astrological charts on my characters. The chart throws in random traits that I am incapable of imagining in my neat little fantasy world. It is impossible for me to be purposefully random (case made by my effort to stamp leaves randomly on my bathroom wall – I needed to balance out the room and ended up with a pattern).

Authors that work in conflicting character traits create something very believable. It may not sound believable for the elderly, and somewhat snooty, mother hen to have a passionate affaire with the émigré French chemist, but Madeline Hunter pulled it off and it added depth, not only to the snooty matron, but to the main characters that had to react to the seemingly inconsistent behavior. My favorite villain from Eloisa James managed to have his own love story. He was pompous and cold, but life experiences landed him with the ability and need for a personal relationship with another human. Somewhere under his satin elitism, he was vulnerable. That incongruity in character draws the reader in and gets them invested in these make-believe people.

It’s hard to analyze my own incongruities. Between the teaching and my parenting, I would say my archetype is earth mother. Of course, I have pinches of other archetypes mixed, but none contradict the overarching earth-mother characterization as much the fact that I write steamy romance. This fits more of the temptress archetype – a definite deviation from earth mother.

How do you break out of being clearly categorized? As a person? Or how do you do this for your characters?

Oh I love you're mother's sense of humour....so did he call? LOL.

For me - well, we could be here all night. Where do I start? Sometimes I probably do the unexpected as well. ;)

OMG!!! And did I say OMG???? I am just as shocked as you are by your mother's flirting! I'm also really, really surprised that she doesn't read your blog...I guess that's cuz you're all grown up and have your own life, but.... I think it's strange. After all, she's a writer too. As for your comments about not making an archetype, I agree to a point. I think it's particularly important for recurring characters in series books to have enough room to maneuver, but I'm not sure it's as desireable in a single romance novel. you don't want to be saying to yourself, "What the hell is going on..why is she acting so out of character?" in a formula-style book. We read these for the predictabilty. We want these books to be witty, emotional and only slightly unpredictable. Shallow? Yes. Sorry.

I'm glad you got to see your mom being out of character instead of talking about her colon...LOL!!

You are too funny. I think its great that you do charts or whatever it takes to think outside the box for your characters.