I'm participating in my fist Hallowe'en party in years, thanks to Nancy. Seriously, I dressed up and trick-or-treated until I graduated from high school. Then I attended parties (each costume sexier than the last) until I married. Then we hosted parties. I got older and fatter and my costumes got less and less sexy. Then I had kids.

Now I make cute costumes and take my daughters trick or treating and worry about the scary decorations.

I have not worn a Hallowe'en costume in over six years. I love dressing up. LOVE IT. It's pretty much 80% of my reason for Renaissance faires. I take my costuming seriously.

This year my daughters will be Alice (the little girl, Disney version) and Wendy from Peter Pan. Why? Because those costumes will really suit their appearances. Last year I was sick and they were cats (cat ear headband, black clothes, and eye liner whiskers -- sad, I know).

We used to live in Ireland and they don't do Hallowe'en (American style). That sucked for 9-13 year old me, but it would be very cool to attend a Samhain bonfire as an adult. As a child, my brother, sister and I went from the front to the back door of our house and trick or treated. My parents pretended to be different people each time. It's a good memory.

My sister lives in Switzerland and forces American Hallowe'en on her multi-national friends. Good for her.

I thought this blog was scheduled to post this morning at 8:00 am. It did not and, for that, I am embarrassed and grateful at the same time. I have not finished making my kids costumes for this year and have no ambition to costume myself. Why? Because I've been writing. 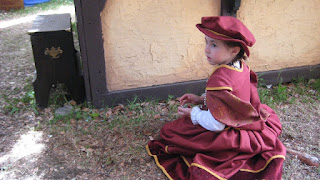 Shown above is pic of kid #1 in her Elizabethan lesser nobility dress from this past year's Renaissance faire. Yes, it's a cop out, but it's better than nothing. She was collecting fairy tears -- the gal at the booth let her keep five of them.

I apologize for not posting this in a timely manner. People who sign up for blog fests and then don't follow through drive me nuts and I'm ashamed to have been one of them. Perhaps I'll be more forgiving of them in the future. Who knows?

BTW, to see me in my costume, go to this recent blog post.

I love your daughters costume and don't think there's anything shameful about it. Your other cultures experience is interesting.

I gave everyone the whole weekend cause I knew people would be busy. So you're just fine.
Nancy
N. R. Williams, fantasy author

Lovely reading about your past Halloween bashes, and such a cute pic of the little one.

I used to do parties a lot, still do on occasion, and I had a friend who'd lost her waistline due to pregnancy and came along as a pumpkin. Honestly, she'd inserted night lights in little recesses of her costume (carboard & crepe paper) and she caught fire, naturally all flames hastily extinguished. It was hilarious because she didn't get burned/hurt but ended up looking a little frazzled here and there, and I tell you we all laughed so much we cried! ;)

It was interesting to learn about how you've celebrated Halloween before!

love the picture of your little cutie, I have never dressed up for halloween b4. We already have christmas lights up in my town.

OK, Erin, that renaissance costume is the BOMB and you have nothing, whatsoever, to be ashamed of. I would love to hear about your actual halloween costumes from year to year. One year my hubby and I were invited to a halloween party and he went as a post man and I went as a shooting victim with really realistic looking bullet holes in my forehead and shoulder.... (This was around the time of the postal shooting incidents)... I know, poor taste, but it was fun.

I live in Australia and we don't do Halloween. But I've enjoyed Nancy's blog party. I decided to attend as a Hobbit (because I'm short) lol.