Tales from the Sidelines Blogfest 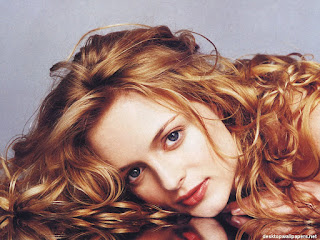 Jane, physically, is petite, buxom, and has big crazy blonde curls. She was overtly sexual in Courtly Love, perhaps using her sexuality to prove that she really was all grown up. I mean, she's tiny and had gone from the care of her parents into the care of an elderly husband. I chose Heather Graham as the physical model. She has a somewhat childlike face, but there is nothing childish about her figure. Man. It was hard finding a not super sexy image.

I couldn't find a good scene that told us who Jane really was (besides a flirt), so I decided to interview her. I did not participate in the blogfest awhile back about interviewing your character, so this was fun.


Erin: With us today is Mistress Jane Ratclyffe. She is a twenty year-old widow and currently serving as a gentle-woman companion to Mistress Frances Pierrepont of Holme Pierrepont, Nottinghamshire. Jane, thank for you agreeing to speak with me today.
Jane: I am happy to be speaking. It has been over a year since anyone spoke to me.
Erin. I know. We last saw you heading back to Holme Pierrepont with Frances Pierrepont. I believe you were planning to stay there and enjoy the Christmas season with the family.
Jane: That is true. Frances and I became good friends during our time together at Hampton Court. I had hoped that the friendship would continue when we returned to the country.
Erin: Are you no longer friends? What happened?
Jane: Oh, no – of course we are friends still. She is just… distracted by her husband. Seriously, the two are like rabbits. I’ve begun coughing loudly before I enter any room. It’s rather disgusting.
Erin: Come now, isn’t that the pot calling the kettle black?
Jane: I’m not saying I don’t enjoy myself – but I’ve never been besotted. Really, the way they look at each other and always find a reason to touch the other one, that’s a little ridiculous.
Erin: I think it sounds nice. It must be wonderful to be in love.
Jane: Love is overrated.
Erin: I did not realize you were a cynic. Last I heard you talk about it, you sounded very idealistic.

Jane: I’m not a cynic, I’m a realist. Besides, I was talking about sex, not love. There's a difference.

Erin: Okay, so Jane is a realist. What else don’t we know about you?
Jane: Well, you don’t know very much, do you? I mean you know about my liaisons at the palace. You know I’m a widow…
Erin: Yes, tell me about that.
Jane: There’s not much to tell. My parents contracted my marriage to a neighboring landowner. I was sixteen. He was fifty-three. I married him because my father said I should. I became lady of the manor. I wish he had been a knight, for then I would have been Lady Ratclyffe instead of Mistress Ratclyffe. But he had a comfortable house and I had everything I needed, so it was fine.

Erin: Were you happy with him?
Jane: I was not unhappy. He was a kind gentleman. I think he was rather embarrassed about the whole thing. My parents owed him money, he wanted an heir to take over his landholdings and there weren’t a lot of options. I think he felt the distance in years between us as keenly as I did. But he was gentle with me.
Erin: This is just based on my knowledge of your behavior at the palace, but I would guess that he did not turn you against passion.
Jane: No. As I said, he was kind. Of course, when it comes to passion, I have enjoyed my widowhood more than my duties as a wife. He was very old.
Erin: How long were you married?
Jane: Two years. He died of apoplexy. I was not surprised – he had lost energy and strength in the year before his death. I was sad that I never game him his son.
Erin: Do you blame yourself for that?
Jane: No. Do you think I should?
Erin: Er… uh, well, society in your era did put the responsibility of fertility 100% on the woman.
Jane: True – but he never seemed displeased with me. And he was so much older, our interludes were not always successful. Can we change the subject?
Erin: Almost. One last question about that chapter of your life – did you wish to marry… what was his name?
Jane: Edward Ratclyffe. No, I did not wish to marry him, but that is neither here nor there.
Erin: Did you have other suitors?
Jane: Yes. Please change the subject.
Erin: Okay -- I'm sorry. Let's see... Ah. Do you hope to marry again?
Jane: Yes, I do. But this time I will choose for myself.

Erin: Do you have someone in mind?

Jane: Not yet -- when I was at court over Michaelmas I played around a bit, but nothing serious. Between the groom and the guardsman I had a good time. Next time I go to court, I will be more of a lady and only settle for nobleman.
Erin: Marriage was a tricky business in Elizabethan England. A lot of them were contracted alliances. Love matches were rare. I don't know what you expect, given that you're untitled and penniless...
Jane: That's not true -- I have my widow's portion. One-third of my husband's assets.
Erin: But that's nothing. How do you plan to entice a noble husband?
Jane: Frances has been tutoring me on ladylike behavior and courtly manners. When I go to court again, it will be when I'm ready to be a fashionable, sophisticated, and elegant lady. It seems I have a natural talent for seduction, but this time, they will have to buy the cow.
Erin: What about love?

Jane: -sigh- Love only leads to heartbreak and sadness. Love is not a basis for marriage. Besides, I will love being a lady. Ha! Don't worry for me -- I won't aim too high. But look at Lady Shrewsbury. She was born no better than I, and now she's a countess! It's not impossible.

An intriguing character, and probably an interesting book to come.

That was very cool. I love character interviews because they give so much more insight than the book does. I like Jane already!

You have a great character there. Thanks for participating

You know you want to write more about her.

That is an interesting approach I hadn't thought about for the blogfest. Great idea to interview a side character. Well done and she is a very interesting character. I'd read a book with her as the main character.