My Lead Gets Her Drink On 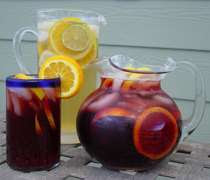 It is a beautiful sunny day. My husband is keeping the children off of me. I am writing. Good stuff.

I have a jug of sangria and I'm writing about my lead character, Mary, getting her drink on. Now, in my first novel, Frances had too much to drink on an empty stomach and ended up throwing up. Not only was her fuzzy mind fun to write, but the vomit scene was funny and a glimpse of real life that many people can relate to.

Now, I decided to write this scene in spite of the fact that I know that my sister (also Mary) will read it and ask me if I notice a theme about alcohol consumption and how I feel about that. I write this scene knowing that Avalon books will want nothing to do with me. I write this scene because it's fun. My main character is at a crazy party. People are handing her beverages left and right. She's going to make a fool of herself. Sir Nicholas is not going to take advantage because he's a good guy. I'm am not glorifying alcohol consumption, I'm merely including it. Why? Because it happened. In fact, in Elizabethan England, it would have been almost impossible to find a non-alcoholic beverage that was safe to drink.

Excuse me, I need to refill my glass.

So, in honor of me completing this drunk chapter and starting the hungover one (it will happen), I will share some deliciousness with you.

I added vodka instead of brandy. I also added halved grapes and diced apples instead of their fruit suggestions.

Now, back to writing. Mary has already had one goblet of lambic. The night is young... but tomorrow her hair of the dog will be Butter Beer (thank you J.K. Rowling and Heston Blumenthal).

Ha! This is great! I won't be drinking for some time (after one too many a few weeks back), so have one for me:)

Thanks for the recipe...loved the electrified lemonade...or whatever you said it was at the pool party.

I think its great for Mary to let loose. And don't worry about Avalon. Write what you'd love to read.

Good point about the safety of alcoholic beverages during that time period. Why wouldn't Avalon like that? Are they teetotalers?