I love historical costuming and fashion design. Love of costume is what led me to study history in college and, ultimately, to write historical romance. My first book, probably unpublishable, was too much a costuming lesson and I have since toned it down. But that doesn't mean I'm not as crazy about it as ever. 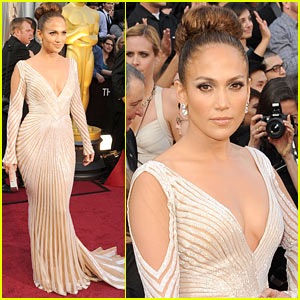 Which is why it was hilarious to me when Jennifer Lopez, one of the most classically beautiful and feminine stars today, quoted Edith Head. "Your dresses should be tight enough to show you're a woman and loose enough to show you're a lady," must be hard to say when your nipple is trying to break free. There is banter back and forth online, but I swear I saw a bit of aureola. Hey, it happens. It's just funny it was happening during that quote. 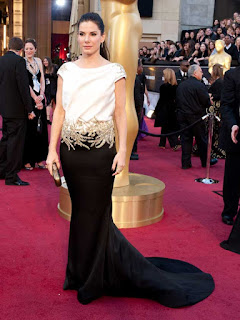 I'm not judging Jennifer Lopez. She is probably involved in her choice of gown to an extent, but more so are her stylists, PR people, the network, etc... She looked like a goddess, nipple and all. That dress was certainly tight enough to show she was a woman. To tight? Eh -- that's subjective. Would I wear it? HELL NO. Even if I had that body? Ummm, probably not.

Sandra Bullock's dress was not so tight as to question her ladylike qualities, but it was an odd cut with the mini padded shoulder caps, so the result was a very boxy upper body. Classy? Yes. Flattering? No. 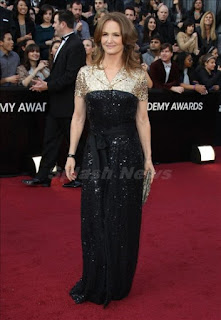 My least favorite has to be the dress worn by Melissa Leo. It looks like one of the billowy shirt's my mother in law wears, only floor length and sequined. Those shirts suit my mother-in-law, but don't belong on the red carpet. This image shows it to have some shape, courtesy of the sash at the waist. I don't think she wore the sash when she presented the awards and that dress was shapeless. If she wasn't showing she was a woman, maybe that means she's an uber lady.


As for positives, I enjoyed Cameron Diaz' nod to old Hollywood glamour. The dress was lovely, but she came across as monochromatic with hair, skin, dress all the same color. I loved Natalie Portman's polka dot gown. Lots of fun. I thought Octavia Spencer's dress was beautiful. It met the standards for the occasion and flattered her figure. My favorite was George Clooney's date, Stacey (whom I have not heard of before). Her dress had that same old Hollywood glamour as Diaz, but with pop. I love how the draping created a rosette. This would be my choice, should I have a perfect body and be invited to the Oscars (both equally plausible), only not in gold. I would look jaundiced. As to woman vs lady, Edith Head would have approved. I was disappointed not to see Kate Winslet or Nicole Kidman-- I don't think  they've ever worn anything I haven't loved.


Overall the silhouettes were streamline. Yes, there were full skirts, but slinky was the word of the day. Very few bright pops of color but a lot of metallics, and very few Bjork-esque risk takers. If the starlets are our aristocracy, our role models, how will this translate into the common woman's fashion? In all, the stars presented a positive body image, recognizing women that were larger than size 2 as worthy of praise. Not too much cleavage or too much leg. I don't recall any short dresses. Most hairstyles were elegant and in natural colors. This was a very safe year in regard to fashion risks. Was this influenced by the economic issues today? Or a growing conservative voice?

If fashion is a symptom, I wonder what the disease is this time? I would have voted for conspicuous consumption in the past, but now?


And if you think this has nothing to do with my writing process, you are incorrect.

Oscar fashion is so fun! I, too, saw some irony in the quote from Jennifer Lopez...would love to know what the person shequoted would think of her dress...she did look gorgeous, but I feel nervous watching them move when the dress looks pasted on and ready to fall off at any moment.

Penelope Cruz was my favorite...that dress and color looked perfect on her.

Did J-Lo once wear some contraption that had to have been held on by double stick tape? The dress contained all of a yard and a half of expensive fabric, sequins. And the tape.