I posted the beginning of my WIP for Justin Parente's 2/13/12 blogfest. I have less than 10k words on that project. When I say it is a work in progress, I mean it. The readers agreed that it was rough. Well written, but not a  hook. I agree. The story had not started yet.

My Karma book is a departure from my era and subject. Karma is an experiment and I am very early on the learning curve. I am even considering changing it to first person. I know, crazy. I have faith it will be a good book -- but right now it's too early to judge.

So, just to salvage my reputations, here are the first 491 words from the work I am currently editing, Courtly Abandon (my 3rd Elizabethan historical romance). Please enjoy it more than you did the last one. :) 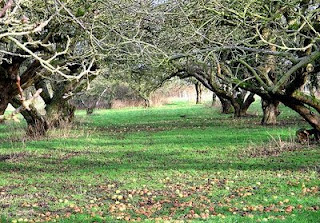 Holme LeSieur, Nottinghamshire, 1573
Jane hefted her farthingale and skirts past her knees as she sprinted across the orchard. Rufus, the elderly hound and her companion for the morning, loped wide circles around her. She was glad he was enjoying himself but hoped he would not trip her. She had to get to the split log fence at the edge of the orchard without becoming disheveled. Arriving at the property line she straightened her skirts, praying she was not already too late.
Out of breath, she leaned against a thick apple-tree trunk and ran a smoothing hand over her artfully tousled blond curls and net coif. She had looked both ladylike and wanton when she left the house. Now she hoped her exertion had brought a rosy glow to her cheeks that would make any hot blooded man think of bedding her. Of course Sir William, Viscount of Kingsley, was not any man. He was the man she was going to marry. She would make him a wonderful wife, he just did not know it yet. More interested in farming, he had not even noticed her flirtations. At least she hoped that was all it was. She could not abide being married to a stupid man.
At least her first husband had been sharp witted. Though quite a bit older than she, he had treated her well and she had been fond of him. She had also enjoyed her widowhood. Immensely. But, it was time to marry again and Lord Kingsley was convenient, comely, and amiable enough.
He frequently made a morning round of his lands. Jane liked to make herself visible whenever possible. Bringing the dog along had seemed like a good idea at first; should Lord Kingsley happen to pass by, he would see her as a lovely young maid, full of life, delighting in country pleasures. What man could resist such an image?
Jane straightened her emerald green silk skirts and leaned back against the tree in a nonchalant pose. Lord Kingsley would never know the encounter was staged. And, Jane looked down to make sure both breasts were still contained, he would get an eyeful.
She waited, adjusting her position a few times. Perhaps she had been too late? Rufus’ bark made her jump.
“Mistress Radclyffe,” Viscount Kingsley’s called out a greeting, “What a pleasure to see you out so early.” He remained astride. Though his voice was courteous, there was no sign of eagerness to see her.
“I love spring mornings and the scent of the world coming alive. Everything is so… fertile. The earth is ripe.” Nicely done. Honest, suggestive, and sure to play to his interests.
The Viscount jumped off his horse, but kept hold of the reigns as he toed the ground, careful not to get mud on his boots. He sniffed the air. “Right now I smell dung.”
Dung? Really? Viscount or not, the man could use a lesson in courtly manners.

This is well-written, in my opinion, with nice detail, and I enjoyed it. However, I fear more than a few people will tell you it's a little too passive.
It's almost there, so please don't discard it altogether. The setting is very nice, but it seems two-dimensional.
Some people might say it's too much telling and an 'info dump', yet I wouldn't say that's the case. Specifically, I think you only need to re-examine some of the verbs. Take another look at this piece and see how many verbs where it's possible to eliminate "to be" and "to have". That might be all you need.
The hook is here, but it's just pale. All it needs is a tiny bit more "colour on your brush".

Thank you for your comments. The passive language is something I struggle with -- especially writing in past perfect. I did a search and came up with 14 'was.'

The very fist sentence didn't grab me, possibly because I have no clue what a farthingale could be. Other than that it was an amazing story line. Well written and interesting. This one made me want to keep reading.