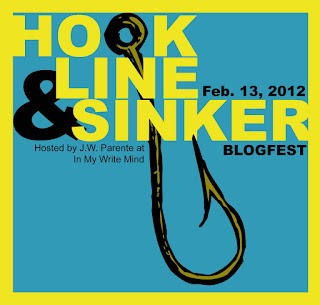 I am entering Justin Parente's Hook, Line, and Sinker blogfest using the opening from my brand-new-me contemporary paranormal romance. Since the blogfest is over a month in the future, this is me being optimistic that I will have finished the first draft of Courtly Abandon and be more invested in my unnamed new project (Haunting Karma? Passion Past? Karma Moves Into a Haunted Condo? Karma's Ghosts? Sexy Ghosts? Possessing Karma? Bad, Bad Karma? -- actually I just brainstormed more successfully now and sort of like Possessing Karma. Although Bad, Bad Karma is funny.... I digress).

Blog details:
Date: February 13, 2012
Where: In My Write Mind blog, and your own
Objective: Post your 500-1000 word hook and critique other hooks posted by participants
Suggestive topics to consider when critiquing: So, without further ado, here are the first 1161 words (it felt weird to cut it off 2 sentences from the end of the chapter) from my current w.i.p. Something Something Karma Something. I'm really looking forward to reading the other entries. I hope you enjoy mine.

Okay, so there's a few things worth mentioning here off the bat:

The writing is solid. It's not fancy, nor does it stick out. It's just good. You build your character for us in an interesting way, but this looks like its probably a future novel with a returning character.

Unfortunately, I wasn't exactly hooked. So, she's waiting in an airport for her flight, and like the good writing, it's just there. Nothing more or nothing less. She gets her boarding pass, assesses other passengers as most people do, and boards. There is the moment where she analyzes the Marine looking at her, which I really loved. I actually would have loved to see more of that. Right now, I know she's a doctor. Go with that. Have her analyze like two or three people in the same manner as the Marine. Just a suggestion.

This totally made me think of Dr. Brennan from Bones (before they ruined the series). I agree with Justin that the writing is good, just not much of a hook.

Perhaps you are starting in the wrong place? All of this builds Kay's character but doesn't give a clue what the story is about. What is the conflict?

It's a perfectly good piece, but there are a couple of things that mean I wasn't really hooked by it. The first is that the scene doesn't seem to do anything in terms of a story. It establishes the character, but it doesn't really give us much about where things might be going. The second is that the language of it comes across as quite formal, so that without ever truly doing the omniscient third person thing, it seems just as distant from Kay.

I agree completely with Justin and was going to comment the same. The writing read wonderfully and flowed well from word to word. However I was extremely bored. Every chapter should have some sort of conflict or add something new. This was just her getting on a flight. For a chapter like this I would want some drama- she's being strip searched because the stupid dog smelled the crack left on her fingernail from last night.- Or she's running to catch her flight and face plants, busting her nose, but meeting Mr. Mcsteamy.
When me and my cp swap chapters...we have agreed that sometimes as a writer we need to fill in the blanks for ourselves and write it out, but after writing this I would cut it. If you want to show she's traveling, start with her on the plane and the horrible kid behiind her is kicking her seat, and the guy from B4 and the woman from C2 have been in the same stall for 10 minutes-their spouses have no idea....It can be anything, but with such wonderful writing I hate for it to be lost in a mundane story. We don't ever watn to read about the "everyday"- we want the "special days" :)--I hope this helps. I truly think you have a way of writing- not too much details, not too little, but give me funny, scary, sad, action, steamy romance-something :)

I think Justin, Stu, and Amber really hit it on the head with this piece, which is to say: the writing is good, but the plot needs some love.

I'm also a little concerned, as I can't imagine an anthropology Post Doc as having lived only in the bubble of academia. The bubble of academia isn't very thick. When you get that degree, it's not all clean houses and dinners in the cafeteria (especially in anthropology). It's living on the fringe, barely having enough money to have nice enough clothes to present your work at the next conference, eating ramen if you make the mistake of taking a class with an expensive book that semester. It's sacrificing, and while it's not real jobs, you still interact with real people. So if she is as isolated as you make her out to be, we sort of need to know that up front. (Also, anytime you book a ticket on a plane, there's a little place to check if your salutation is Doctor, and no one in the airline industry misses it; they've been chewed out enough to be wary).

But if those are the only complaints, its not much. I liked it and I would keep reading, but you'd need some plot very soon.

Ditto. I agree with the above. Your prose were good but its a story that hooks. Conflict is the heart of story. I liked the detatched analytical voice and did not feel it was too removed, only that it fit your character. Thanks for sharing!

Either her voice needs to stay the same and spectacularly strange things happen around her, or her internal voice needs to become wildly inappropriate as she imagines the deep down, dirty secrets of the people she observes. Or, the scene as a whole needs to be cut as nothing happens and no real observations take place beyond the superficial and some light speculation.

While it's technically solid, it's lacking in plot, character and conflict. So while it may be a pleasant read, I can not say I'm hooked.

Since Kay is a doctor of anthropology and sociology, maybe her observations could become more astute, perhaps even detective-like? Perhaps she might notice something the TSA misses, she points it out and thwarts an smuggling or terrorist incident? Just a few suggestions.

This scene seems to be written for this moment: "Kay had established her social rank academically. She would never gain notice or import by being gregarious or vivacious. No, she elevated herself into an elite social rank by her own intelligence and work ethic." But hopefully, you will show much of this telling paragraph in the chapters that follow in her new job and the way that the people around her in that job interact with her.

In any case, thank you for sharing. One of my WIPs is a Beauty and the Beast tale set in Elizabethan times, so I'm happy to have discovered that you write Elizabethan historical romance.

Wow, a lot of editing advice. I hope you enjoyed that :) lol. I'm going to be nice and say although the story wasn't full of fast moving i thought your writing was wonderful. You can always add a bit of tension relatively easily. I would continue reading, however if the pace didn't pick up in the next chapter I would probably wander. :) I'm a new follower from the blog-hop :)

So much good feedback. Thank you. I have a feeling, like many of my first draft chapters, this will end up being deleted in the long run. It's a constant critique that I need to start the story where the story starts. Every time I start a new project, I think I'm doing just that, then find I didn't.

My experience with professional students is not that the bubble is physical, as in limited to a space, but that they only interact with other professional students, value knowledge for the sake of knowledge, and don't consider the mundane things like taxes that go into paying for it. To me it reads like an extended childhood with the expectation to be taken care of, rather than taking care of themselves. I know that doesn't sound complimentary opinion and I know it doesn't apply to all members of academia. Kay is used to that idealistic existence, and has stepped out into the world of home ownership. Something different.
I plan to have her be a sociology/religious studies professor. Her motivation is to find out what it is to be human. She's almost a sociopath in how outside she feels (the difference being that she cares). I look forward to getting back to this project - I have a lot of great ideas and just need to make them happen.

Again, thank you for the feedback. I really do appreciate it.

Well, I am a romance girl, so most romance books, as long as the writing is good will hook me. You hooked me and I truly I look forward to reading more about her. She is quirky and awkward. I really like that. And I like that she knows it.

I won't bother going into more than that.. just know that you had me and I would keep reading!

Personally, I loved this hook as it stands. I hope to see some more good stuff later, but just getting to know Doctor Karma Betancourt in an airport setting, which is something several of us can relate to, was interesting. I want to know what's going to happen to her in New Orleans!

The secondary characters are fun, but obviously bit players, (I liked the first airline attendant,) and the world is one that she's just passing through, but I don't think these facts are problems, as they just let Doctor Kay shine more!

Thanks for joining in the blogfest.

I enjoyed the descriptions here of the other characters that Kay encounters. I would not, however, find this as a hook if it were the first chapter in the story. There was no real suspence to draw me in and make me desperate to read chapter two. If I were already hooked into the story line I would have enjoyed it more.

By the way, you left off the R on "your" in this sentence "You flight should begin boarding in the next twenty minutes or so." Yes, I know weird things bug me. Enjoy your week off teaching and write, write, write!

I was disappointed by the lack of bodices - but you have me hooked. I keep trying to imagine Kay deposited more than 100 years back in time, I hope that is where you were sending her ;)

There will be some late Victorian costumes into the book. Her condo is haunted by a man and his creole mistress. She'll find herself redecorating and developing a new style based on the historical influence of the ghostly possessions.
I feel out of my element writing about someone who wears Birkenstocks versus kid leather slippers.