I'm excited to be participating in the first campaigner's challenge of Rachael Harrie's 4th campaign.

This short features characters from my Elizabethan historical romances. Mary, in Courtly Scandals, feels like a failure as a woman because she has been told she can't have children. In my epilogue, I show that to be untrue. Here, I give her the wonderful, drug free experience of natural childbirth with a reasonably clean midwife in 1573. Without further ado, here is my 223 word flash fiction submission. I tried, but I could not hit the 200 on the nose. 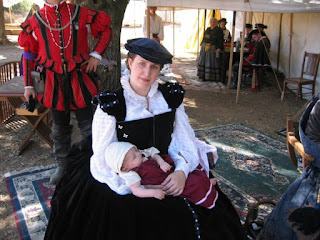 Shadows crept across the wall of her confinement chamber. They were the only proof time was passing. That, and the contractions that wracked her body.
Frances stood by the bedside, her hand strong around Mary’s. “Breathe through it. It will be over soon.”
Mary closed her eyes, the orange glow of the candles filtering through her lids as she dragged in another breath. It wasn’t the pain that disabled her, but the fear. Opening her eyes, she silently scanned the faces of the women surrounding her. Were they afraid for her?
The pain that wracked her body had her upright in a nonce. The midwife hurried over, rubbing herbs between her hands before she crouched between Mary’s legs.
She nodded to Frances.
“It is time.” Frances sat on the bed behind her, pulling Mary’s back against her chest. “With the next one, bear down. Hard.”
Mary clenched her jaw, growling past her teeth as she pressed back against Frances. There was so much burning pressure..
“That was good, Mistress Fitzjohn.” The Midwife crooned, her hands a steadying force.
“The baby…” Mary started to cry as the next convulsion overtook her.
“Push!” Frances called from far away, just beside her ear.
Mary let the scream free as she spent the last of her strength.
“A girl!”
A wail filled the room as exhaustion over took her and everything faded.

The above image is at a small Renaissance faire in So. Cal, October of 2006. That is my youngest daughter, Clara, sleeping in my arms. Both daughters were products of c-sections, so I have no real experience with the pushing process.  :)


Addendum: I added the words in bold at the end so it didn't appear that I killed Mary off. Some of the comments made me realize that her death was implied. And yes, chances for death in childbirth was 1 in 4 for the mothers. That same percentage held for infant mortality. Then for deaths before the age of 5. And again for deaths before the age of 25. The good news is if you made it to 25, you were in it for the long haul and could live until your teeth fell out.

I love this one! Very well written, kept me hooked the whole time! :) Nicely done!

I agree! Very nice work! I hope the mom is okay... Great job!

Very absorbing. It drew me in from the very beginning, Roland

Love it (and the photograph is priceless).

I like this because its different than all the others I've read! Good job.

It seemed very real to me. Childbirth in the 16th century must have been terrifying. I wonder what the survival rate was? Well done - great writing.

After reading all the horrible / terrible / horror producing stories, this one is real cool!!!

So sweet!! So enjoyable!!

Such a sad fate for many mothers in older times and less scientifically advanced cultures. I'm glad to have seen it fade...

@all -- I added to my post to make it clear she didn't die. My own pregnant sister (named Mary) and are on the outs, and I'd hate for anyone to assume I was wishing her ill.

The prompt did lend itself to a thriller, but I worked it into my genre/era and am happy with it.

Death in childbirth was common, more from infection/fever that followed than the birthing itself. With the advent of forceps and the midwife giving way to scientific, medical doctors assisting birth, the percentages increased.
The King's Midwife is an interesting book about midwifery in early modern Europe.
Again, thanks for the comments. I'm still working my way through the 100+ entries.

Very real and sensory writing. I loved when the midwife rubbed herbs on her hands. Childbirth in the 1500s must have been hell for the family.

I like this a lot. Interesting take on the prompt!

I love historical fiction and have written similar scenes with not-so-happy endings for, as you said, back in the day, not every birth was as successful. Your piece was well done! I commend you! :)

I love that everything went well in this, and you used all the challenged so well! Very good job!

Great writing! You are very talented if you can write a description like that without ever actually experiencing it yourself.

You've painted a very clear picture of both the time and the experience. Mine is #71

Great voice, and beautiful writing! Wonderful use of the challenge. Mine is #82

You clearly know your stuff. Very well described scene. Glad both the mother and baby were OK!

Great entry! Both my boys were c-section, but you described childbirth just how I imagined it ;)

Erin - you left a message on my short story/flash fiction post that I'm on the short list for finalists at this stage (stage 2).

What are my next steps?"

this was great! and thanks for your notification! made my day =)

I studied this era in grad school (Shakespeare, specifically), so I love all things Elizabethan. You look awesome in your costume.

Powerful piece of work! I know exactly what she went through! Both my children were delivered naturally the first with just a little happy gas, the second I was lucky enough to reach the first guerny in the emergency room! Ouch!

I was the cenre of attention among the interns!

Great entry! I love the time period you chose and that it depicts a birth with a midwife, since I've been a bit of a birth junkie since I started researching natural childbirth and the history of birth in my early twenties.