My Books Are Not Epic'd 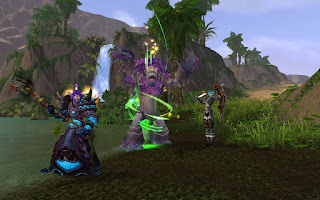 In WoW you create your character and follow chains of quests.  As you do so, your character becomes stronger, the quests more difficult, and the story unfolds (some call gaming a modern form of literature).  You quest and quest until eventually your character reaches the maximum level.  Once you are as experienced as you can be, you fine tune your character, selecting specific skills that will help you.  You continue to improve, earning better armor and stats so that you will be able to participate in the end game (and so other players will take you seriously).  Eventually your character is one of the best of the best.  Elite.  New players ask you for guidance.  Tasks that once were daunting now are easy because your character is almost all powerful -- still not good enough for the end game (the final fight against the boss-de-jour), but pretty darn good.

And then a new expansion comes out.

All the work you did to make your character the best it could be is now moot.  Your gear is obsolete, the fights are harder... you have to reinvent yourself in order to get to that end game boss.  Players that you once pwned become better than you faster than you thought possible (because they are all home-schooled 12 year olds).

I have just gotten my character to the maximum level - 85.  But now I need to regear.  I have to relearn my spell rotation and make sure I'm equipped to handle the new quests/dungeons.  The easy part was getting to 85.  The hard part is making my 85 level character count for something.

Erin,
This is a great analogy. Having played the game & being honest with myself that I would never get anything done - ever again - if I continued to play, I understand how hard it is. And, you're spot on how these types of games parallel the writing life.
Patti

I get the analogy here, and I love the way you compared gaming with writing!

The analogy could probably work with anything we try to do but most definately with writing. Though as someone who has never played a whole level through on a video game some of the finer points may have been lost on me. I prefer the old fashioned paper form of literature . . .