Starving for a Blogfest 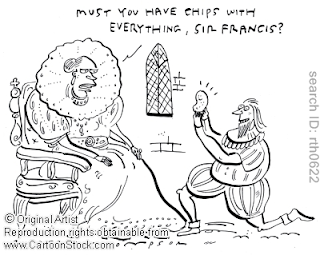 Thank you to Angela for hosting this blogfest.
The idea is to have a scene where food is central, or at least included.

I was very excited because I have something this time! Hurray for me! In fact, I even blogged about writing this scene. Read that fantastic blog here.

So, here it is, from my WIP, Courtly Scandals (by the time I finish this book, I'll have posted every scene. Oh! And then I'll get published and have to redact all of it. If only...).

The banquet hall was the largest hall of the palace, but swaths of fabric draping from the beamed ceiling created a more intimate setting. Looking around, Mary noted that the meal was rather intimate as well. She saw the Queen’s favorites, costumed of course, and a few other courtiers that she recognized but could not name. Really, this must have been a Queen’s invitation only affair – she had never been included in something like this before. Then again, tonight she was not herself. Mistress Parry had made sure that.
It was hard to eat, as tight as her borrowed corset was. Then again, it did give a little more cleavage that she usually had, so maybe it was worth it. As she eyed the glazed pear in heavy brandy cream sauce, she wished she was not quite so confined. Course after course was delivered; the rice pudding was carried in by acrobats who seemed sure to drop the savory dishes all over the guests. Each food and each presentation outdid the last, until the main course arrived.
Toga draped servants came in, each group of four bearing a regal gilded swan with wings poised for flight. This was the chef’s coup de grâce: It was magnificent. The gilding on the skin of the swan was from saffron powder and flakes of gold. It had been deboned and stuffed with goose which had been stuffed with a gold ringed pheasant, stuffed with a black bird, French hen, turtle dove, parteridge, and, finally, a pear. One of the servers sliced the whole swan in half with a razor sharp saber, exposing the layers as one half teetered forward on the platter. There were three swans in all – one for each table. Each layer of meat was distinct as the servers cut thin wedges for the guests. The very fact that non-royalty was being allowed to eat swan was overwhelming. What would they serve next? Horse? Peacock?
Court was an amazing place. Oddly enough, Mary realized she would much prefer a simple mutton pie to the decadent fare. Not that she could have eaten that either.
“My dear beauty, if I may present you with a goblet of lambic?” Mary could not remember the nobleman’s name, but she knew him. He was excessive at the best of times – who knew how he might behave at Christmas.
She smiled at the young lord even as she eyed his magenta satin slops with hesitation. What had she gotten herself into?
“Lambic! I thank you must kindly.” Mary took the offered goblet from the young lord and placed it on the table. “Now I must insist you take your seat and enjoy the rest of this feast. The palace staff have gone above and beyond and deserve our appreciation.”
“As you say, your Grace.”
“Your Grace? I am simply a lady of the court – and a woman in disguise. Do not hope to see past my mask and I shall not look past yours.” Mary held her head high, but wore a broad smile. She hoped she was regal enough. Then again, she wasn’t really impersonating the Queen, she just wanted to keep people guessing.
“Oh, Indeed!” The young man winked broadly and deepened his reverence before turning to leave. He was probably very proud of himself.
“That was well done.” Sir Nicholas placed his hand on her thigh under the table, while he took another bite of beef and blood pudding with custard. “You may be the Queen or you may not. Either way, a lovely woman accepted his gift.”
“I do like lambic.”
So do I, Mistress Mary. So do I. I do not, however, like blood pudding. I had it once as a child and I gagged. Of course, I was also being melodramatic.

I came across Chef Heston Blumenthal while I was researching this peice. After I found him, I spent hours on YouTube, not getting anything written.

The description of banquet feast was stunning, vivid in colour, I could smell those damn birds, the culinary juices flowing, my mouth salivating. How could you do that, present a cyber feast and leave one wanton? Oh the pain and torture of this vision! ;)

What a deliciously fun blog fest! It seems I've lost the knack for finding all the fun one's... correction, any blog fests!!!

Loved this piece... now I'm hungry, I think I should read these after I have a full belly.

The description was so effective I could see the scene; always a page turner for me!

Even Zombies Have Taste

yummy. it made me really want those pears too. lol

heres a sentence that could be redone for clarity and strength "Each food and each presentation outdid the last, until the main course arrived."
the way it right now is a bit awkward.

Fun Blogfeast entry. The curse of the corset - good boobs, but no room for food.

I really like how you set up the scene here,
Erin. The swaths of fabric give it a sumptuous feel and the whole TurDuckHen...craziness with a pear tree was genius!

the description is excellent and shows the reader what she's like. and then the corset... i agree with Theresa.

OMG, that swan is crazy! Who thinks these kinds of dishes up? It's like food art ;) Still, I'd be curious what it would taste like. I'm totally drooling right now over the glazed pear, though. Mmmmm.

Loved this: "What would they serve next? Horse? Peacock?" It gives us a good taste of her voice ;) I'm also trying to figure out if Sir Nicholas knows who she is or not...

This is truly the feastiest of all the Blogfeast posts so far. I'm so glad you could join in!

Very auhentic and engaging. Your MC is very intriguing.

I liked your description and could relate to the era. I am so sorry for being a day late. I forgot that I entered this one. I am very bad. I have posted anyway, if you are so inclined.

Sorry I'm late. Had a lot going on this week! This reminds me of Pretty Woman...except I'm assuming she's not a prostitute.