Aren't I clever? Look at my little play on words. Appreciate it.
Okay, the momen 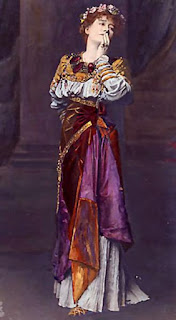 I came up with the blog title long before I knew what I was going to write about. Now, here I am over a month later, finally editing my draft that, until now, only contained the title and the image pictured right. ---------------------->

Since I started this, Creepy Query Girl wrote a blog about how her lead character is based on parts of her.

Of course it is.

Frances, in Courtly Love, is a whole lot of me. In fact, writing about her getting over her issues was sort of like therapy. She looks like Kate Winslet. So do I. Sort of. Or I did back in the Titanic days.

When I started writing about Mary, my sister (also named Mary, by coincidence. Mary was a common Elizabethan name, which is how I picked it) asked me if it was another therapy book. Ummmm... yes. There are parts of me, but also parts of my sister, my mother in law and Emma. She looks like Julia Roberts.

And Jane, my lead in book three? Will she reflect me? That would be a yes. Although, as I create her character, she has a lot of characteristics in common with my four year old, Clara. She's super clumsy, jumps without looking, and does not think about cause and effect. Her love interest, not yet named, is based around the feeling I had back in high school with a boyfriend that never kissed me. She looks like Heather Graham. Then again, so does my 4 year old (but without the figure, make up, and platforms).

Book four is about Margaret. She's not well developed, but I know she's savvy and sophisticated. Independent. Unwilling to be manipulated. I think that's what I want to be. If I had been more like this character back in high school, I would have grabbed that cute boy by the ears and kissed him soundly. Don't tell me he wouldn't have kissed back. His youth pastor only had so much influence. I don't know who she looks like. She's a real historical figure, like Frances, and there are portraits of her, so I have to be careful. I do picture her more striking than pretty.

Then there is this project that has been niggling at me for the past few months. I may start it next instead of Jane's story. Contemporary Paranormal Romance. Gasp! Say it isn't so! Don't worry, there are no vampires or werewolves. This is the story of Karma, but she goes by Kay because Karma is much too whimsical of a name. Oddly enough, that lead female is based on aspects of my brother and brother in law. I don't think she'll have much of me at all besides my compulsive need to decorate. It's a great story. I hope I have the confidence to make it happen. Margaret would. Frances might, too. I don't know what Kay looks like, but I'm pretty sure she's a Taurus.

So where do you get your inspiration for your characters? I remember reading once that J.K. Rowling did not base any of her characters on anyone in particular, with the exception of Crookshanks (don't quote me on that). How much of yourself do you put into the characters you love? Or even the characters you hate?

I usually put a lot of me into both the ones I love and especially the ones I hate. It's theraputic.

I think it was G.K. Chesterton who said that "A good novel tells us the truth about its subject; a bad novel tells us the truth about its author." I always took that as a warning not to put too much of myself into what I wrote. But it's hard to avoid, especially when you create MCs (and even villains, which are in many ways a lot more fun). I think you pour a bit of yourself into every character you create, even if they're based on other people.

The MC in my novel (Martin) isn't based on me, even though we hold identical political views. He's got his own personality. He's a great deal more idealistic than I am. But as for the OTHER MC, Martin's best friend (Walter), he's based on MY best friend John. Same foul mouth, same build, same sins.

As for the villains...well, I haven't created enough to know.

That is a good warning. A disconcerting one.

Then again, I always feel like I know the author that much better after each book I read. Without looking for insight through the main characters directly, you can tell about the author's sense of humor, sense of beauty, moral values, their interests, what touches their hearts, etc... I mean, they would not write a poignant scene and expect the reader to feel it without first feeling it themselves. Specifically in the romance genre, a world of happily-ever-afters between unlikely characters, the reader has to have a level of buy-in or suspend their disbelief. In order for that to happen, I think authors have to wear their hearts on their sleeves or their stories will not ring true. I can't think of any other way to do that but to write what I know best -- which is me. I trust that my demographic will have had similar experiences and/or issues and relate.

I sort of love my current villain. He is such an ass. Some of his caustic comments are the type that I wish I had thought of in the heat of the moment but, instead, thought of a few hours later. He has no concern with anyone's pleasure but his own. He is the antithesis of me -- but even in that, I'm channeling parts of myself. :)

There is a little of me in each character, I'm sure. Usually people point it out to me and I'm shocked. I find the novel writing process cathartic as well. Can't wait to read some of the Kharma story! ;)

Thaks for joining uo to blogfest!

Oh God, I hope too much of me is not being outed in my novels, other than love of horses, fast men and fast cars! ;)

Well, I'm not an author, but I think the idea that J.K. Rowling didn't base any of her characters on real people that she knows is rubbish. I can't imagine not basing at least aspects of a character's personality on people you know (or yourself)... To me, there doesn't seem to be any other way to write...but maybe that's because I'm not a writer!
Erin, I think it's interesting that you say that you feel you know the author that much better after each novel. I have never, ever thought about that. I own every single one of several romance author's books and yet I've never considered that I might know the authors at all. I just really enjoy their books. My current favorite paranormal romanace series...Alpha and Omega by Patricia Briggs.