Show Me The Voice Blogfest

Thank you to Brenda Drake for hosting this blogfest and putting this agent judged contest together.  The premise is that participants list the first 250 words of their completed manuscript and other participants critique them.  The critiques should focus on the author's voice and be helpful.

So, without further ado, here are the first 247 words of Courtly Scandals, a historical romance.

Addendum: Based on comments about slow pacing/info dump, I am cutting the entire third paragraph and pasting in the bits that follow to make up for word count (currently at 266).  Really it was only necessary in order to tie it to where my story left off in my first book.  Given this is a stand alone, the background/connection is irrelevant.  Thanks for the comments. :) 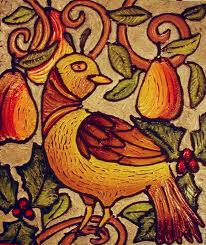 Chapter 1: On the First Day of Christmas My True Love Gave to Me a Partridge in a Pear Tree
December 25th, 1572
Whitehall Palace
Mary’s corset bit into her back and hip as Anne gripped her in a firm embrace.
Anne appeared unaware of Mary’s discomfort.  “Christmastide will be so wonderful this year!”  She grabbed Mary’s hands and threw herself into a reel, towing Mary with her.  “I have you, my dearest friend, with me.  It will be such a jolly time.”
Mary smiled as Anne pulled her into another swift hug.  She had not seen Anne for almost three years when circumstances reunited them a few months past.  Mary had left Anne’s father’s household just before Anne had married the Earl of Oxford and become the Countess.  She had never had high expectations for the marriage, but been horrified to see how sapped, how spiritless Anne had appeared upon their reunion at Hampton Court Palace.  In spite of the fact that she had not heard once from Anne in the three years they had been apart, she felt like she had no choice but to accompany her to Whitehall palace for the Christmas festivities.  Anne needed a friend.
While her smile seemed genuine, Mary could not believe that she actually intended planned on attending any of the twelve nights of Christmas revelry.  Anne was much too concerned with what her father might think to actually enjoy a good party.
Mary did not have that particular problem.

If everything she had heard was correct, the twelve nights would be full of the most amazing entertainments, some provided by the Queen’s household legitimately, some by the courtiers unable to control themselves under the guise of Christmas.  She could hardly wait.
The two ladies finished two full twirls before collapsing side by side on a chaise, their full hoop skirts fighting each other in the limited space.
Mary stood and reached out her hand.  “Here, let me fix you.”
Anne accepted the offered assistance and stood, letting Mary settle her skirts into a more ladylike fashion before sitting again, this time more elegantly.
Mary suppressed a smile.  Anne had let the new high rank of countess go to her head.  It was nice to see a moment of honest abandon – this was the first she had witnessed since she had joined Queen Elizabeth’s court in late September.  It was now the twenty-fifth of December.  Three months and nary a smile.

Interesting opening premise. Your voice conveys a time period well, showing me up front that this is a historical piece. I love that you've got the appropriate language and costumes included. My only suggestion is if you have more movement happening in the next few paragraphs (Mary and Anne going somewhere, doing things, etc), that you mix that in more up front with the thought you've got in the third paragraph.

You have a good opening with a good voice that shows the period it is set.

But, I agree with Loralie that something needs to happen in the next few paragraphs (I know it's only a short passage and maybe something does).

Aside from what's already been pointed out, I had trouble envisioning this: She grabbed Mary’s hands and threw herself into a reel, towing Mary with her.

I like it - just a note about para 3, there is a lot of use of the word "had". I understand a lot of it is probably necessary but maybe a few sentences could be rewritten to reduce the number?

also, "intended on attending" - this is kind of a mouthful.

I do think it hooks well though. I'm not sure if there's a clear character voice though.

Interesting premise. I love your ending line in it - gives me a clear understanding that we've got one character that's an extrovert. I'd say the character gestures are a little difficult to follow, but that would be my only suggestion at this point. Good work, I'd definitely read on!

I would pare down the 3rd paragraph. It's a little long and I don't think we need to know all of the details just yet.

Good voice, though, and you nicely captured the historical feel of the story! :)

Trisha beat me to it, but I agree about this sentence "Mary could not believe that she actually intended on attending...". The phrasing seems awkward.

I'd also maybe tighten Mary's pov. Sometimes it seemed like you almost slipped into Anne's.

But, I agree that the general voice/feel of the piece reads authentically historic. Nice job! :)

The backstory is necessary but I don't know that it should be in this part. Energy is implied here, but I don't feel that it is portrayed strongly enough.

I do agree with the above comments about paring it down. Perhaps you could begin with the party and the disorientating sights and sounds for the protagonist? The atmosphere is vivid and the characters well-defined.