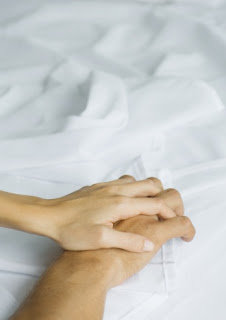 I am writing about a sexually promiscuous woman which is deviating from the romance genre norms.  Jane has been there, done that.  She knows what she likes and is not afraid to go get it.  But her love interest, Percy, is left over from an innocent time in her life.  He's the one who got away.  Her first true love and never kissed.  But he is not supposed to be her love interest.  She is supposed to be pursing his brother (the titled Earl).  She cannot afford to play around with Percy, mainly because it would not be playing, it would be more true than any other experience she has had.

So I am writing a passionate scene where they are just holding hands.  A simple touch.  No kiss, nothing illicit, but intense.  The question is, is it enough for the genre?  Yes, of course, they'll get around to having sex -- but it has to be a slow build for the purposes of this story.  And, after all, the anticipation is the best part.

The sexual possibilities of hand holding came to me via memories of Don Juan De Marco.  I saw this movie when it first came out.  It seemed a safe thing to see with my parents (I was just out of high school) but I was wrong. The movie made a long time impression on me.  Of course I was a Johnny Depp fan (21 Jumpstreet being part of my formative years), but this was just, well, hot.

The opening scene is in a restaurant where Don Juan seduces a woman just by kissing her hand.  I have to admit, it made my breath catch.  I thought of this scene as I wrote it -- I just hope I've pulled it off.

Warning: This clip is R rated

I think a scene like this could be very seductive. The build up is part of love making. Especially in period writing.

WIth Don Juan as an influence I am sure you pulled it off with style...

I don't know a lot about the romance genre but from a purely story perspective that is a fantastic premise and the hand holding could be a very intense scene. Because its 'only' hand holding it could get more intiment than an actual sexual encoutner in a character who is used to keeping those at a distance.

Ooooo that sounds pretty darn hot to me! Don't read much romance but I just love when things take their time. So much more delicious when a romance takes it's time to get going.

I don't see a thing wrong with it. Starting out slow can make for a great climax. And of course, you can put conflicts each time it gets close to being more, prolonging the inevitable. Just adds to the sexual tension.

"And, after all, the anticipation is the best part."

I completely agree. Sex scenes are all well and good, but as a reader I like to feel as though I've earned it. I like knowing that the character's had to work for it a little bit too.

Sometimes those little touches make all the difference. Just the idea of this scene you're writing made my heart flutter... Maybe I'm just a weirdo.

My first visit here, but I knew it was gonna be fun when I got that warning on the way in... hehe.
Nice blog, we're gonna have some ideas to share.
I always thought, the sex scenes themselves shouldn't surprise the reader but... ah for lack of a better word... satisfy. This might mean building up to it, depends on your characters and their... ah desires?