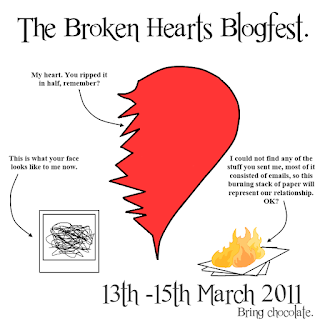 Thanks to Dawn Embers for hosting this blogfest.

The premise:
The basic idea is to write about a heart breaking or one that is already broken. Show us the wretched emotions, the anger, depression, fear, whatever happens after the happy honeymooon lovey-dove V-day stuff is over and all that is left is a broken heart.

BTW, if you can't read the print on the graphic shown here, it's well worth clicking on to get a better view.  Good stuff.

This is tough for me because I write about falling in love and happily ever afters.  Of course, a genre requirement is the conflict and poor communication skills that leads my lovebirds to think they won't be together forever.

This selection is from Courtly Scandals.  It is 770 words -- I'm sorry I could not find anything shorter that made sense on its own.


At that moment she knew with crystal clarity what it was that she wanted.  She wanted to be Charles’ wife.  She wanted everything that he wanted.  A future together where the only thing that mattered was their love for each other.  Children.
And that was the one option that was not available to her.
The room was dark, yet Mary could see the hope in his eyes.  The man she loved wanted to marry her.  This should be a moment of joy.
Instead, all Mary felt was shame.
The moment stretched from romantic to awkward.  Mary had to speak, but did not know what to say.   “Charles, never doubt it that I love you.”
Charles jumped to his feet and stepped forward.
Mary stepped back and raised a staying hand.  “To marry you would be to do you a disservice.  I love you too well to harm you so.”
Charles was silent a moment, then turned away, turned back.  “What?”
He sounded so confused. Almost angry.  “The Queen Herself has given Her blessing.”
Mary held her head high.  “She should not have.  You are worthy of a better woman who can be a good wife, a mother to your children.  I am sorry to have engaged your affections.  I never would have if I had known they would lead to this.”
“Lead to this?  Engage my affection?  Mary, what are you playing at?  If you love me – there is nothing to stop us from marrying.”
She did her best to remain calm.  “Except that I will not marry you.” Mary was choking on the words.  Each time he forced her to deny him, he hurt her that much more.  If he was any sort of gentleman, he would take her at her word and stop.  “I told you when we first met that I could never marry.  I have always been honest with you.”
“Have you?”  Charles almost spat the words as he stepped closer.  “Honest?  What of the baby, Mary?  The baby you told me that you lost?  Lady Oxford said something quite different, something that ladies choose to do to avoid the shame of bearing a bastard.”
Mary recoiled as if slapped.  “I told you the truth.”
“Of course you did.”
“I did!”
“The funny part was that I knew what you had done and didn’t care – I wanted to marry you.  It didn’t matter to me because I thought I knew who you were.”  Charles laughed, his voice a harsh bark in the close room.  “And what did I know?  Apparently, nothing.”
He was willing to bind himself to damaged goods.  He was honor bound – obligated to offer for her.  It broke her heart that she loved him so much and he was merely ready to ‘do the right thing.’  He should be relieved that she had turned him down.  Instead he was throwing her past in her face.  She would not stand for the abuse.  “And what did I know of you?  You were merely an attractive guardsman and there was nothing else I needed to know – or so I thought.  Then again, you might have mentioned you were Oxford’s brother.  Who lied to whom?”  Mary’s anger had taken hold.  She was not to blame here.  If anyone had been dishonest, even by omission, it had been Charles.
“I never lied about my relationship with Oxford.  Part of me assumed you knew.  If you did not, why would it matter?  I have no ties with him.”
“Do you not?  So, this conversation you had with Anne, that was, what?  Between strangers?”
“She told me in effort to dissuade me from proposing.”
Mary stopped short.  “You owe me nothing. You should have let her.”
“And yet you say it is not true.”
“It doesn’t matter one way or another.  I may as well have.  It has ruined me no matter what choice I did or did not make.  I can never be a wife.”
Charles stalked toward the door and stopped, turning abruptly.  “I will not beg.  If you do not wish to marry me, tell me one last time.  But tell me truly without your petty excuses.”
She wanted to say yes, to apologize for hurting him, to tell him she was a fool … but she could not.  “It is not a petty excuse.  I am no good for you.”
“So that is your answer?”  Charles did not even look at her before he left the room, the door slamming behind him.
Mary stood there alone, absentmindedly noticing the way the scarce moonlight that filtered into the dark room seemed to catch on the facets of here jeweled skirt.  Charles was gone.  Charles had offered her the world, and she had declined.
It was the right thing to do.  Wasn’t it?

OMG. Now I'm sitting here with a broken heart. This is so great I love it so much I hate it. You did a killer job on this scene. Took my breath away. Please tell me they hook up and it's happily ever after. Please.

Ooh, ouch. I think it's more painful when both characters want the same thing but both are too stubborn to fess up. This was definitely heart-wrenching.

Oh man...knowing what the reader knows and seeing this disaster of a proposal just makes me scream! Great job!

NOOOO, Mary! Don't let him go.
That's what I kept saying as I read your excellent excerpt.
Great job.

Great entry for the blogfest. Having hearts broken because she thinks it's necessary even though she knows that she doesn't want it to be that way. While in romance we expect the couple to be together there does have to be conflict before it happens. I like the main characters inner turmoil in this section in particular. Well done.

Thanks for posting an entry in my blogfest.

Nooooo....come back Charles! He has to, doesn't he? She's strong but can she be swayed...I hope so. Great job.

Ah! Mary--you're killing me. Run after him!