Harry Potter Blogfest -- Who Would Be Your Mates?

Thank you to Michael for hosting another Harry Potter blogfest.  The question asked us who would be our mates if we were in the Harry Potter world.  He asked us to pick 2 characters from the novels and describe our friendship with them.

I decided to do this in more of a speculating format than a narrative one.  I looked back at who I was in middle school and high school and the friends I had and, more importantly, the friends that I still have from those years.

If I had been called to attend Hogwarts, eleven year old me would have been placed in Ravenclaw and wondered why.  My perception of myself was as pretty rather than  smart.  I was always surprised when someone was impressed with something I did or said.  I was also (and still am) a little off.  My sense of humor was/is not always appropriate or funny to anyone but myself.  I did not then (and only slightly better now) have a good idea of how to behave in different social situations.  I was odd, but being pretty kept me from being a social misfit entirely. 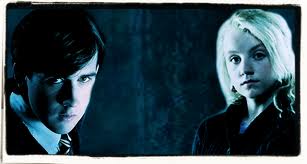 That said, I think my friends would have been Luna and Neville.

Luna and I would talk nonsense to each other.  I would appreciate that she found me practical and level headed when no one else did.  I would love the freedom from all judgment that she gave so generously.  I would be honest with her in a way I could not with anyone else.  She would appreciate that I never mocked anything she said.  You see, she does note insults but she has such a calm confidence in herself that she never lets it show.

Neville would have a crush on me and I would be oblivious about it because I just couldn't see him that way.  He would always be there for me, offering to help with my homework and buoying me with the faith in my abilities that I did not have for myself. I would give him a female perspective on things that confused him.  I would be there for him when things got to be too much to handle, his shoulder to cry on. I would trust him in all ways, seeing him as reliable and, unfortunately, gender neutral -- not realizing that I was hurting him when I complained about how the boys I was interested always went for the popular girls.


I'm looking forward to reading who the other bloggers have chosen.

I like how you've written this - they're two of my favourites as well. They are special and loyal people. Nice piece!

I love the honesty of this! Such a great assessment! I can see having a friendship like you describe with Luna myself. Even with her bizarre beliefs, I really find her one of the wisest characters.

This is awesome. I totally agree.

I was always hanging out with those on the edges of the social circle when I was in school.

I love this! Luna and Neville rock! Great choices!

Isn't it amazing that we all managed to live past those difficult years in middle school? I love Luna too, and you are so correct. She accepted people the way they were. Neville is also a generous and kind young man.
Nancy
N. R. Williams, The Treasures of Carmelidrium.

Really nice. Great insights. I think you captured them very well.
Thanks for sharing.
HMG

You've pegged Luna and Neville perfectly. I enjoyed your entry, and your analysis of why you'd get on with them. Very tender.

I can certainly understand why you chose Neville and Luna. Both sweet and unobtrusive.

I liked how you described your friendships and both the receiving and giving ends.

After all that's what friendship is ALL about.

Thanks so much for joining in on all the fun.

You picked some sincere and true blue friends. You described those friendships so well, with deep emotions. Surely those relations would last a lifetime.

Aww, I can totally picture them in your muggle world now. Neville would be a kind boyfriend. I love the outcasts.

great choices - both slightly left-field which would make for an interesting ride!
Lx

Such a sweet, sad little friendship. Poor Neville! I love how real you made this. I can see a story developing already . . .

I could so go for Neville Longbottom. Yeah. And you have him perfect. The unrequited crush. But wouldn't you take a closer look once he pulls that sword out of the hat? :)

It sounds like you'd have true friendship with Neville and Luna--a great trio!

Hey neat - Luna and Neville were who I thought of at first, too! I liked reading your speculations.