The CSI team is always finding fibers, hairs, or biologicals on the carpet of the victim's home. Sometimes in the drain, sometimes on the sheets, there is always some sort of clue that stands apart from the myriad of other fibers, biologicals, etc... that exist in the victim's home. Except that there are no other samples. Why? Because all their victims were surprisingly clean. 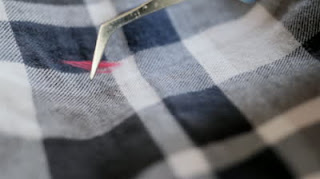 Every time I watch CSI, I wash my sheets out of shame. If CSI had to come to my house, they would find all sorts of stuff, very little of it relevant to their case. I think of all the times my daughter has wiped buggers in my bed. When my husband has come to bed, collapsing fully clothed in his lawn-mowing jeans. When the bare feet that earlier went outside to feed the dog then tucked themselves under my sheets.

God only knows what's under my nails or how many toxins are in my blood just from working in Hemet. If they searched my drain, would they find samples of the killer's blood amidst all the human, My Little Pony, and Barbie hair there? Trace would be working for hours to differentiate between all the different samples. By the time they were done, they wouldn't want to solve my murder -- they'd consider it karma for them having to process all the dirty tissues in and around the trash can.

If they had to autopsy my corpse (I know, dark.) they would have to cut off my not-matching undergarments, including my too-big grandma underwear. They'd find evidence of past bruising, a lot of evidence. Eventually they would match it up to the corner of my bed, the open dishwasher, my daughter's elbow, and various other things I don't even know about. They would find all sort of residue of different lotions, topical ointments, etc... none of which were pertinent to my murder.

Of course, they writer's couldn't tell a one hour story if they dealt with someone like me. Even when they dumpster dive or have a murder in a back alley, the tiny evidence is clear enough that it stands out as relevant against the grime of the region.

These are they types of things that go through my head when I watch crime dramas. When it comes to writing a mystery, I have to be careful to give clues, but not be captain obvious. It has to be possible for the reader to solve the story, but not so blatant that the reader is frustrated. Luckily all my clues lay in paper trails and verbal accounts and I don't have to deal with soiled sheets and random, important fibers.

Ha ha! So true! I don't think they'd ever manage to solve my murder either!

My husband is certain that if I die he'll go to jail. My books on poisoning, serial killers, etc. he thinks will convict him. My sister in-law though, says if he dies, she's turning me in!
Oh dear, one of us will pay! :)

Hahahaha!Loved it. You're not alone, these are the thoughts that cross my mind too.

Yeah I'm not tidy and my underwear rarely matches. I do have very unique teeth, though, if only for identification purposes. :-D