I remember how important page count was on my first book. Knowing nothing about word count norms, I was aiming for about 325 pages and, when I finished my first hundred, I celebrated it as a major milestone.

Now I gauge progress by word count instead of page number, especially since I like to type in Times New Roman and the submissions I've had requested in the past specified Courier New. That said, I still got a little shiver of excitement when I noticed I was well past my first hundred pages. I may still have 60% of a book to write, but I'm getting there. It's healthy to be able to find validation within oneself, right.

There's an urban legend within the online writing community that editors turn to page 99 right off the bat. Of course first chapters are polished and hook the reader, but is the writing still as engrossing by page 99? So, following the precedent set by me with my other books, here is page 99 (in the Times New Roman version, Courier New is something completely different) of my work in progress. 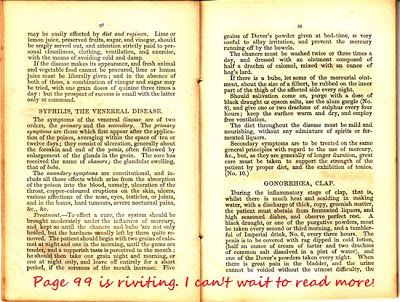 “So, do you?” ’s voice was barely audible over the roar of the water pounding against her scalp.
She stepped out of the stream. “What?”
“Do you plan on sleeping with him, no strings attached?” repeated her question loud enough for the whole locker room to hear.
“Oh my goodness, keep your voice down!” Karma heard her own words echo through the cinderblock room. “I’m a professor,” she added more quietly, poking her head around the corner of the stall to make sure would hear her. “If any of my students heard you…”
“I’m one of your students,” answered, her voice level. “Right now we’re both naked and you want to talk about boundaries?” With one raised eyebrow, she turned back to face the shower head, presenting Karma with a view of her naked butt.
“Sheese.” Karma ducked back into her stall fully and finished her shower in silence.
#
Philippe woke up, his back aching. Lifting his head from the cold cement table top, he looked around his studio. How long had he been asleep? The sketch pad showed his half-hearted attempts to design his next piece, but more so showed rumpled proof that his nap had been a restless one.
Smoothing the crushed sheet, he reviewed the measurements and notes. He wanted to incorporate glass into the current sculpture, but didn't know if it would be possible to make the transition as seamless as he envisioned. He stood, stretching his neck and shoulders and he strode across the room. Uncovered, his sculpture laid waiting. He decided her name was ‘Becoming” and the rough pool of wood laying jagged against the workspace would merge with blown glass as if she was emerging into the corporeal world. She would be stunning, his best piece to date – if he could pull it off.


Just for fun (if you have the patience to read more), click below for the Courier New page 99.

“I’ve heard of hurricane parties before, they’re a real thing.”
“They are, but usually are limited to family and friends and have more to do with bunking down and sharing supplies than an actual party. This here,” he gestured around the room, “this is just a reason to drink in the middle of a workday.”
Her laugh low, she looked up at him, resting her chin against his chest. “What are we doing?”
“I’m not asking myself that question. I’m just going with it and figure anything meant to happen will happen.”
“That’s very transcendental of you.”
He frowned down at her. “?”
She nodded, “Amongst others. You’re handing over control to the universe.”
“The control was never mine to give in the first place.”
She pulled away to look up at him. “If I hadn't seen your sculptures, and was just judging you on your utility boots and shoulders, I would be amazed right now.”
“My shoulders and boots?”
He sucked in a breath as her hand skimmed the silhouette of his arm, shoulder, outlining his bicep. “You’re more than muscle.”
Stilling himself against the tremors from her simple touch, he drew his hands from her back to shape her ribs, tracing over the defined muscles of her abdomen with his thumbs. “Aren't we all?” If this was a path he shouldn't pursue, why did it feel so right?

I followed your blog, would love to read you more :)

Thanks for stopping by my blog Words are Timeless and your kind words.

Hi Erin!
I couldn't find an e-mail address anywhere to e-mail you separately, but I tagged you in my blog: http://www.stacysrantings.blogspot.com/2012/10/the-next-big-thing-tag.html

You really should have some kind of contact info on your blog, you know, just in case an AGENT or EDITOR were intereted in your work. Just saying...

I did enjoy your pieces. I look forward to seeing more (that's if you play along with the blog hop).