Thank you to Michael for coming up with this blogfest and competition.

In honor of HP, I would like to have an HP blogfest. In 500 words, I would like you to create a scene with any of the HP characters from any of the seven books. It could be anything you want. Funny, magical, serious, etc. And for an added twist, let's have it set during the holidays. Christmas or Thanksgiving. 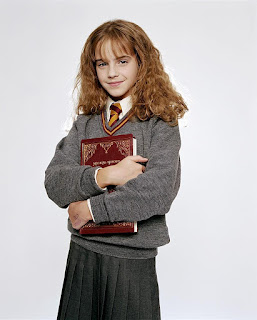 "Mum, have you seen my book?" Eleven-year-old Hermione Granger shuffled into the kitchen from the back garden, her hair even more frizzy from the run through the November drizzle.

Her mother did not even look up. "No, dear."

Perhaps if her mother had taken time to look up from the Journal of Modern Dentistry and actually listened to the question, she would have remembered that Hermione had last been reading in a makeshift tent behind the sofa. If she had given a simple answer to a simple question she may have avoided frustrating her daughter. Of course, she had no idea that Hermione's level of frustration and sheer desire for her book would lead to...

Bits of plaster and insulation sprinkled around the room as the well worn copy of Nesbitt's Enchanted Castle came crashing though the kitchen wall. Hermione stood in shock as the now battered novel flew directly into her hand.

"Er..." Hermione knew what had happened was somehow her fault, but could not think of a reasonable explanation as to why. All she knew was that she had really, really wanted her book and her mother was ignoring her – again. At least this was not as bad as the time she had gotten angry at that snobby Agnes Milford at school who would not shut up about how dentists were not really doctors, in spite of the title. Poor Agnes' mouth had suddenly sealed shut and no one could figure out why. Rumor had it that the surgery, performed by real doctors, had been quite painful.

A book flying through the wall at home was not nearly as publicly mortifying as maiming a classmate.

Her mother shook debris out of her perfect curls, looked at Hermione with an expression that may have been fear, and left the room without a word.

Hermione stood still a moment longer until she heard the door of her mother's room click shut. Breathing a sigh of resignation, she retrieved the broom and dust pan and started to clean up. It would be much nicer if she could make spontaneous bouts of cleaning happen instead of all the random, usually destructive, unexplainable incidents.

A shuffling sound at the front door caught her attention and she dropped the dust pan to investigate.

There on the floor by the door was a letter sealed with red wax. It was addressed to her, Hermione Granger. The return address, Hogwarts School of Witchcraft and Wizardry.

Oh, very nice! The story of Hermione's early magic is one I hadn't seen, yet now that I see it,I can't help wondering why! She obviously had to do some and making a book come to her is PERFECT!

Oh my gosh, I love this one! Great work!
erica

This was very well written i was right in character with her. I always wondered how she got to Hogwarts and what life was before there. thanks for posting.

Oooh, I think this may be one of my favorites! I wish we had seen more of Hermione's life in the books, but this is a great substitute! Well done!

Another surprise for me.... YAH! I love surprises. Choosing Hermione's pre-Hogwarts life is very intriguing. I love how you had the book crashing through the house and her mother's non reaction and retrieving to her room.

My favorite part was the poor little girl who had to have surgery. Ouch!
You also nailed Hermione. Very well done.

There's only one negative for me. You forgot the Holiday element. It is part of the blogfest.

Otherwise I enjoyed your entry very much and thank you so much for writing a really fun entry.

Oh this is a lovely idea. It shows you are a Harry Potter fan with the little details. Great stuff :O)

Hermione on the day she received her letter. How extraordiarily neat! You nailed her character to the T. Or is that M, for magic?

How many of us wished that we had received that letter years ago!!

You caught Hermione's character so well.

What a unique choice! You did an excellent job with this one. I loved learning more about Hermione!

Thanks for the comment! I had a lot of fun with this and look forward to reading everyone else's.

After I had written it, I went back to copy/paste a blurb from Micheal's blogfest announcement into my blog and noticed the holiday thing. Short of rewriting, which I wasn't up for, I simply added that it occurred in November. And, since they don't celebrate Thanksgiving in England, I made a brief nod to November weather and called myself finished. Of course, would Hermione have received her Hogwart's summons in November? Maybe, if her 11th birthday was thereabouts. Anyway, I do realize my adherence to the Thanksgiving/Christmas guidelines was a reach. :)

Well, this was a fun read no matter if you didn't put in the holiday element! It's very clever how you showed us Hermione before we meet her in Hogwarts. Loved it! :D

Wow, I love it! I bet Hermione's mum wished that spontaneous bouts of cleaning would happen, too. :)