Preparing for a Writing Conference

I've been making a lot of jokes, and will continue to do so, about being prepared for the Romance Writers of America conference with my Spanx. The truth is that last year in Anaheim, I ended up taking them off within the first hour. I decided comfort mattered more than less visible lumps. This year I have the ones with shoulder straps.

Last year I researched blogs and articles, determined to present myself as respectably as possible. In all, I did fine, but this year I have a better understanding of conference norms. Let me state here that I am in no way an expert. This is merely a collection of lessons learned in no particular order.

1. I learned it is worth it stay at the conference hotel. We stayed down the street, but the price difference didn't make up for the inconvenience of not being able to pop up to your room with fifty pounds of  books. More importantly, the hotel bar and lobby was a serious hot spot for networking after hours (and during).

2. I didn't need full printed copies of my manuscript. They just took up bag space and even though my pitching went well, all I handed out were my one sheets. I came prepared with full proposals with bios and my first three chapters. Even the agents who asked for my first three wanted them via email, so it was a waste of paper, toner, and shoulder pain.

3. I didn't need to have my laptop with me during workshops at all. I was busy staying on task during the workshop and mingling after. Having my head buried in the computer would have wasted valuable face to face opportunities.

4. I had head shots done prior to the conference and included my picture on almost everything. I'd read that it was a good idea and I absolutely agree. It puts the name to the face, helps created a visual memory cue. I tend to make an impression (one way or another) and may as well work that. As much as I hate having my picture taken, it was worth it.

5. The idea of an 'elevator pitch' is not what I originally thought. I'd stressed over how to summarize 85k words in a single sentence. One of the first workshops was led by Angie Fox who explained that if she led with the summary of the story it would seem like it had been done before (because everything has). Instead she led with something different, something that captured attention. She sold her story with a pitch about geriatric biker witches.

6. Business cards. I'd read that they were something I needed, but dismissed it. I'm not established as an author. Who would want my business card? Hotel bar after hours mingling with fellow writers yielded many business cards, all of which I saved then made a point to follow their blogs, buy their books, whathaveyou, to maintain that conference connection. This year I have business cards (with my head shot). I ordered mine from 123Print. I found them easy to work with and my order arrived just days after I placed it. RWA has a deal with Moo Cards.

7. Back to the Spanx. It was hugely important to be comfortable AND professionally respectable. I did well in all, and I partly owe that to breaking my foot and being forced to wear sensible shoes. Now I love shoes. Love them. There were many fabulous shoes at the conference and I was jealous, begrudging my Sketcher Mary Janes. That said, I could walk at the end of each day and I can't say the same for many other attendees. Unless you wear shoes like that everyday (and if you write, chances are you're barefoot right now or in slippers) it's not worth it.

8. The definition of professional attire differs from state to state. This conference is on the East Coast where things are a little more polished than in casual California. Industry professionals are dominantly from New York. Suits are not out of place. Even in Anaheim I saw many tailored, elegant, expensive looking suits -- a huge contrast to the handful of people in sweats and flip flops. Don't stand out for being too casual. Last year Mary Wine, in a Oriental silk shantung tailored coat told me you have to look a million bucks to make a million bucks. With her hair in a braided coronet and her stunning outfit, she looked expensive, professional, and still had personal style.

9. Know your writing. Who is your audience? Where would it be on a book shelf? What established authors have a similar style AND how are you different? I do better expressing myself in the written word than verbally. I had to constantly remind myself to calm down, slow down, and answer the question. People don't ask about your book unless they actually want to know, so don't be afraid to share. This is not a time for self deprecation. It's okay to be excited and proud of your work.

10. It is not okay to be catty and judgmental about other authors. Last year I heard someone criticizing a well known author who was at the conference. If I overheard this conversation, who else did? You never know if that author's editor is next to you at the bar. Don't be a jerk. If you don't have something nice to say, don't say it.

See you in Georgia! 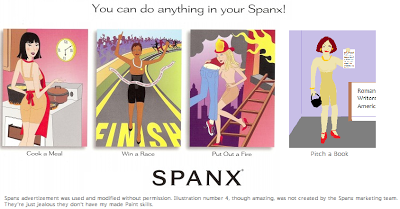 Thanks for the tips! I agree, lugging around a printed manuscript doesn't seem worth it :)

At my job we have casual dress over the summer, and it's almost been revoked because some people are taking that cue too liberally. I think it's always safer to dress more up than down. Plus, it's a chance to show off our fashionable sides! Women care about fun shoes/skirts/hair etc. probably moreso than men :)

I think this is all great advice. I haven't been to any writer conferences, but I've been to a ton of conferences. Professional, comfortable, and knowledgeable, these are definitely the keys. Good luck this year!

I LOVE your list and wish I'd known some of this before my first conference. I totally agree that the balance of comfort and professional attire is key. I met my agent through a conference pitch with her boss. Had I shown up barefoot (which I wanted to), she might not have taken my seriously. Well...maybe.

Have a great conference!

Such great advice! You'll do great. Spanx? I tried to get in one once; it was not a pretty sight.

One of my co-workers had a interview for a lateral transfer. She dressed in the "loudest" possible clothing that totally described her personal personality. I advised her to go home and change cuz they were interested in her as a professional and would only remember what she said at the interview. She replied "I want them to remember me long after I'm gone." Well I'm sure they remembered her outrageous attire, and thus did not remember what she said about her skills and abilities.

My point; don't focus on what you look like - unless it is intentionally to distract from your lack of skills.

Erin, you have writing skills worth focusing on. Let them speak for you, not whether your are a certain weight or snappy dresser. Look professional and talk talk talk about your project you are selling. That is what the agents are interested in.

Thank you for posting your learning experiences. Unless you've been there - which I haven't - you just never know what to expect; and I'm sure each conference is different depending on the agents/editors/publishers present.

These are great tips! I'd never heard about the head shot one.