Schmoozing, But Not Boozing

Some of you know this already, some don’t, but two years ago (as of July 1st) I decided to no longer drink alcohol. I do not think booze is bad, but it is bad for me. Drink away, I’m fine with it. I’m not judging you or drooling after your martini. Seriously. Yes, sometimes I miss having wine with dinner or I wonder what the new cider by Sam Adams tastes like, but none of that is worth breaking the seal on my sobriety. I can rationalize anything if I try hard enough, but in this subject there is no grey area.

Different people have had different reactions to this information. Some get all, "Hallelujah! Alcohol is from Satan!" Others think of their own drinking habits, get uncomfortable with the idea that they may have a problem, and try to rationalize with me to help me realize I should join them for a drink. Some people tell me how proud they are of me or try to be sensitive and not order a beer in my presence. All of these reactions make me uncomfortable. Am I overly sensitive? Probably.

In an ideal situation, I’d be with friends or acquaintances at a bar or restaurant. They’d order their drinks, I’d order my iced tea, and that would be that. OR maybe one friend wants to buy me a drink and I say, “No thanks,” and the conversation ends there with a smile. The thing is that people like to drink with other people. If someone in the group is NOT drinking, unless they’re pregnant or Mormon, well meaning friends will want them to join in the drunken fun. Peer pressure didn’t end with high school.

I suppose I could fake being either Mormon or pregnant (or both), but I don’t. And I hate simply saying that I don’t drink, because people tend to assume I’m some sanctimonious jerk judging them. So then I have to explain why to complete strangers and then the reactions listed in paragraph 2 begin. Besides, it’s really personal.

The fact that so much networking occurs after hours at the hotel bar makes my skin crawl, not because I’m afraid I’ll be tempted, but because I know all this mess will come up. Based on observations last year in , the stereotype that authors drink a lot is not false. Since I want to be social and I want to network within my peer group and industry professionals I’ll be at the bar too.

Last night I had a dream that I was at a club and someone bought me a drink. In my dream I decided it would be polite to just drink it. What harm could it do? Even in my no-real-life-consequences dream, I still ended up spilling it “accidentally.” It sucks that such a farce seems necessary in order not to offend. In fact, in real life, I frequently order tonic and lime so people assume I’m drinking and don’t give me a hard time.

This year at RWA in  I absolutely intend to hang out at the bar with my pretend booze. I will have a great time meeting great people without any liquid courage. I have a feeling that I won’t be the only writer there in a similar situation. Even so, the thought makes me more nervous than the idea of pitch sessions.

In mainstream American cultural, drinking is the socially accepted norm, at the conference even more so. Chances are good they’re already uncomfortable and may feel like an outsider. I write this with a simple request -- while schmoozing at the bar, live and let live. If someone chooses not to drink, please make it a non-issue. 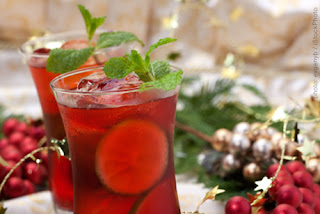 I've got to say, the "You might also like:" suggestions from my LinkWithin gadget are intriguing in their randomness.

I think it's great that you know yourself. I'm sure you've come up with every version of "I don't drink, no I'm not judging you," there is, but one I've found really useful is to tell people that you are either on a very strict diet, or that you are in training. You don't have to explain, but people will make a different assumption about you. (and the fauxito looks fantastic)

Yeah, booze has way too many calories, plus it's not cheap! That's usually why I don't drink. Plus, it just makes me sleepy, which is fine if I were headed for bed!

Good luck at Nationals, though. I never could do the whole bar routine. It's so noisy, I could never understand anyone anyway.

Good for you. I admire your determination and self-understanding.