On Blogging and a New Award

I wrote my first book completely alone.  I say alone in that I was not a part of the writing community.  I had my sister and my husband helping me brainstorm, edit, etc... but as much help as they were creatively and as a support, they were both as woefully ignorant as I was about the writing industry.

When I started trying to get published, I had the misfortune to get an immediate positive response on my first query to the only publishing house I had researched.  I say 'unfortunate' because it ended up creating a misconception about the process.  After that bubble burst, happenstance (Facebook) reconnected me with an old friend -- a writer.  We formed a critique group and she introduced me to the blogosphere.  Through the blogs, I discovered this world full of published and unpublished authors, editors, and publishers that were there as a resource.  I could find the answer to any question.  But more importantly, I was no longer alone.

The blogs that I found most effective were just musing about the writing process.  Whether the authors wrote romance or not, they still were writers trying to tell their stories.  Our conditions were so similar, each of us trying to find time to write the story, the drive to jump through the right hoops in the right order in order to find an agent -- we were all around the world, writing dramatically different works and yet we were all the same.  When I decided to create a blog, I chose to make it anecdotal, sometimes analytical, but always about my persona experiences in the writing and publishing process.  I did not expect anyone to learn from me, but rather to relate.

In honor of the blogging process and in homage to some of the blogs that I first started reading, I have created an award.  Yes, blogging awards are silly, but it's nice to get a gold star from time to time.   I created this "Risk Taker Extraordinaire" award specifically with the idea that I would give it based on out-of-the box blogs.  Then I thought that an unpublished author jumping feet first into a community of strangers with the hope of acceptance and camaraderie is taking a heck of a risk.  So, even if I do not name you in this impromptu and silly award ceremony, feel free to take an award for yourself.  You're out there, exposing your work, your heart, your soul, to a bunch of strangers who may well be insane.  You, my friend, are a risk taker extraordinaire. 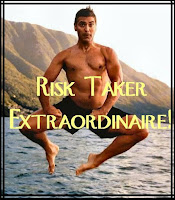 So, without further ado:
To Raquel Byrnes -- for writing the message from her heart despite industry standards, challenging existing norms, and having it pay off.
To Roland Yeomans - for the very nature of his blog, his work, and the way he approaches story.
To Taryn Tyler -- for hosting monthly writing contests and giving us the ability for immediate gratification in a industry of rejection.
To Patti Struble -- for giving shout outs and introducing me to bloggers I may not have otherwise discovered.
To Andrew Rosenberg -- for sharing his OCD writing strategies with a smile.
To Katie Mills -- for my first blogfest/contest experience and for introducing me to the perils of stalking agents.
To Susan Kane -- for jumping into the online writing community with that new fangled computer thingy. Go team Kane!


Note, I have no idea where I got this pic.

Hahaha that is such a nice idea for an award.

Thank you, Erin! That writer friend of yours sounds smashing! ;)

Erin, your great and gracious comments about my blog, not only validate me, but they uplift at the end of a very long, grueling day at the blood wars. Thanks for the award. We are all of us winners, for we have found a community of dream-nuturers not killers.

Take a peek at my book with the free Kindle for PC app, would you? Tell me what you think of the free first chapters. Have a beautiful week, Roland

Thanks so much for sharing your experience and for this very pretty award! yum!

I basically wrote alone, too. Skilled friends helped me proofread it, but that was years after the stories were completed. I'm fine with that, though. Stories and books shouldn't be written by committee.

Thank you! I've never recieved a blog awared before. I like gold stars. They are shiny!

Thank you! this newfangled computer thingy is pretty darn daunting, but I am learning. I appreciate everything about you and your writing. Do you...uhm...know anything about the guy in the award?

Thanks for the award!
Although anyone who knows me would know I'm the least OCD person they know.
I force myself to track all that stuff or I get completely lost.
I should post a picture of my desk sometime. Some days I feel I'm wading in paper.