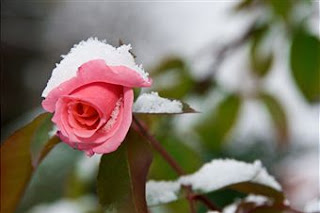 Thank you to Tara Fouts for hosting this blogfest.

The premise:
1. this blogfest tests your skills on writing a hot kiss scene without the sex. Of course, if it leads up to that, that's fine.
2. scenes can be up to an R rating


This is the first kiss between Mary and Charles in Courtly Scandals.  They just met and escaped a crowded ballroom together.  She doesn't even know his name.


As if the joy were too much, the sky opened, softly coating the dark in a flutter of snow.  Their flight slowed as the delicate kiss of ice floated around them in the winter night.  Whether it was Mary herself who slowed first or her companion, after several more steps in the flurry of snowflakes, they both stood still, eyes up to the heavens, faces raised to embrace the fresh, cold air.
Panting puffs of icy breath, Mary stifled her laugh, afraid the harsh sound of her voice would ruin the beauty of the moment.  A warm hand reached to cradle her cheek, her jaw.  The warm flesh against her skin was a sharp contrast to the increasingly cold night.  Snowflakes settled on her lashes as she turned to face him.  He was a beautiful man – he belonged in this moment.  Icy flakes lay against the blond waves pulled back from his face, the shine in his blue eyes echoing the glimmer of moonlight against the ice.  She did not know who he was, but he had run with her – he had flown and laughed with her.  They had shared a moment of abandon outside of any boundary.  Slowly he drew her toward him even as his lips lowered upon hers.
The touch was so soft.  So warm.  The snow fluttered around them, but where his hands held her, she felt nothing but heat.  His lips moved and she welcomed the deeper touch.  She wanted to smile at the joy of it.  Her hands moved up to caress the planes of his chest, her fingers seeking upward toward his collar and his neck.  He was so strong, his mouth a steady pressure against hers.  His tongue teased the corner of her mouth, gliding warmly against the smooth fullness of her lower lip, coaxing her to open herself more fully for him.
He invaded her mouth, claiming it, twining his tongue with hers.  Her body was heated under his touch and she wanted to feel his hands everywhere.  Her lips moved against his, her hands seeking to learn the strength and warmth of his body.  Around them flurries of snow spiraled to stick to the frozen earth, encasing them in icy silence.  They were alone in a magical world.


Don't forget to sign up for my Paint it Purple Blogfest on March 25th! 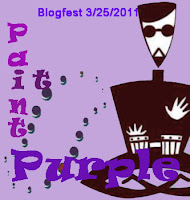 I love the hot with the icy in this scene. It extends the feel to outside the kiss...which IS quite hot, by the way.

The whole imagery, the flakes and vapor breath and heat...awesome.

There is something about passion in the cold that is riveting. You did a great job. Come visit my entry for a first kiss that is also the last for two star-crossed lovers. Roland

I love the snow aspect. It really does create the perfect mood/scene for this entry. Having the characters be in such a moment, away from their usual influences so that even names seem irrelevant is great. And snow for a "hot" blogfest just works. ;-)

I agree with Roland on passion and cold. I loved your contrasts. I especially love that line: He was a beautiful man – he belonged in this moment.

Thanks so much for entering!

*swoon* indeed! Sorry I'm late with my comments! And yes, I love the hot/cold contrast(s) too! The snow, the warm hand... very cool.