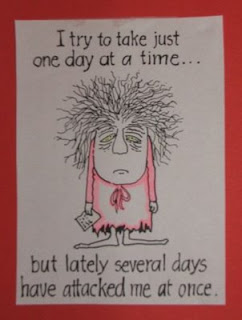 I'm writing my Courtly Scandals synopsis for Golden Heart. I'll get them my contest application tomorrow, then have until the end of the month to edit and revise like crazy before I have to send off the hard copies of the manuscript.

This means a couple things.
1. I finished Courtly Scandals. I did not announce it with fireworks because I don't feel done. There was no satisfaction in completing the last chapter, partly, I think, because I'm going to be rewriting that last chapter.
2. I have two weeks to fine tune a manuscript. I have no delusions of that happening. In fact, my husband told me to look on the Golden Heart as a growth experience instead of hoping to win anything. Worst case scenario, I'll get a score card that will give me a very loose idea about reader response.

Anyway, I'm taking a break from editing to write my synopsis. I got frustrated with that and decided to let Microsoft Word do it for me. Do you think they'll like it?

Mary laughed. Mary nodded her understanding. Mary had a child? Mary stilled. Charles stood, raising Mary with him. Mary blinked once. Charles smiled. Mary left the room. If Mary could…

Mary sighed. “Mary, there you are!” Mary was pleased when Anne smiled. Mary laughed at the thought. Mary smiled at the memory.

Mary was in awe.
Mary was stunned. Mary took another sip. Mary almost sighed. Mary made a disapproving face.

“Mary is no whore. Mary had never seen Charles like this. Mary felt sorry for her. Charles

oh my goodness this is so funny, no wonder auto summarize never caught on. The judges will shoot themselves if they hear one more person say Mary, I think you should stick with you good ole brain, in this case it is better that the computer.
Wishing you all the best in the contest.

Dump the software, kick your brain into touch and hit that keyboard! ;)

I like the line about how Mary's chamber felt different.

Hang in there. You'll get it done in time and you'll do great. You've worked hard and smart... which will serve you well.

That was fun. My Courtly Pleasures auto-summary reads much the same, except it says 'Frances' instead of 'Mary.'

Raquel -- for shame! This is a family friendly blog site! Actually, it isn't, so innuendo away. Note to self: never use 'chamber' as a euphemism. It sounds much too roomy and brings cobwebs to mind.