Grammar Is Not The Boss of Me! 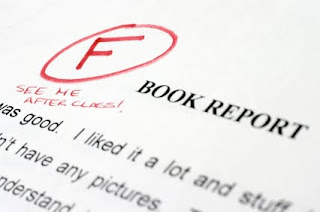 I have had critiques where the suggested changes were limited to what spell and grammar check had to say. I have had critiques where entire sections have been reworded so much so that the characters and the plot were no longer my own. But by far, the most useless critiques have been from people who more or less graded my manuscript. They did not concern themselves with story, characters, flow, pacing, continuity, etc... they looked at each sentence individually and made comments and recommendations in regards to structure. They spent hours and hours, but never actually read my book; they just read a series of sentences. They probably held back from giving me a C- and asking me to redo for a better grade. Their commentary, when all was said and done, was limited to grammar.


In which I discuss my thoughts on grammar rules:
Grammar is only important as it pertains to furthering the story and connecting to the reader (it does have to make sense).

Writers are not English 9 students learning sentence structure. We know it already, sometimes intrinsically. We know it well enough to know how to use that writing structure, or, as is more often the case, to break the rules in order to play upon emotion, theme, set the pace, make the reader anxious, etc... We could not do that if every sentence we wrote had a clear subject, verb, and modifier and/or every paragraphs was 5-7 sentences and had a clear topic sentence. We write in fragments and run ons. We create words and break away mid sentence.

We're not writing an English paper, we are writing characters. Characters need to be real. They think. They feel. They are not always logical. The reader gets to know them through the way we write them. Sometimes the character's thought processes are random. And sometimes they start sentences with 'and' or end in a preposition. I like to refer to these things as stylistic rather than grammatically incorrect. These things make the author's voice clear and unique. The first first chapter (I wrote several) of Courtly Pleasures (previously known as Courtly Love) was like a term paper. It was grammatically beautiful. Each paragraph was organized around a central theme. It was eleven pages of back story, so it was very much like a research report on Frances Pierrepont and Elizabethan culture. Once I got involved in the action of the story and the dialogue, my writing adapted to tell a story.

I grade student's papers to help them better understand the English language. I write so my reader better understands my story. Totally different. I did not write a paper. I am not a creative writing student. I am a writer and I wrote a book.

Ending this diatribe, I give myself permission to gerund away(ha, I used it as a verb! Take that Strunk and White!). Grammar is not the boss of me. It takes more of a middle management type of position. Grammar is like the supervisor who feels like he has contributed when he made a list of rules about how to use the copier and then goes and makes idle threats when he notices someone did not dispose of the Styrofoam padding that came in the replacement toner cartridge box in the manner designated by the list of rules, so then he laminates the rules so everyone will know he means business and he feels good about the power over copier etiquette until someone else does something else wrong which results in the copier making copies with a thick black line across the middle of every page and then the employees who care about that sort of thing wish they had followed the rules at least some of the time. Like I should have in regards to grammar rules about run-on sentences.

Is grammar your friend? Do you even think about it as you write? Or do you just write?

Grammar has its place, but given that you're witing a historical romance then aspects of dialogue and narrative passages may well seem - to the inexperienced eye - perhaps unfamiliar in terms of modern grammar. But then again, so too regional dialect can cause problems for the lesser well-read in today's society. In particular novels written by Dickens, Austen and the Bronte sisters consist of long sentence structure, huge paragraphs, and all rather convoluted in style and presentation: not easy reading. Too often publishers have reprinted editions by these authors in what can only be categorised as modern speak and modern prose, which leaves a lot to be desired in creating sense of time and place for historical reading.

As for critiquers and critical assessment, yep, there's plenty out there voicing their expertise, but few writers in the historical genre are as hot as they think they are. Take Regency novels, many written by novelists that clearly research by way of Austen re City of Bath & Landsdown Racecourse, London and the Ton.

Few of these authors though, seem to have heard of Cheltenham Spa, and few knowing that Epsom (Surrey) Racecourse was frequented by members of the Ton, not Ascot (Berkshire)Racecourse, the racecourse of today's high society, which is owned by the Queen and not far from Windsor.

Chin up, and follow your dream your own way! ;)

I couldn't agree with you more! I wrote my first novel last year and I am on the final edit now. The first person who offered to read and help me edit the first draft. Sent it back to me with the comments, "I can't read this!" Your grammar is abominable! "Your sentence structure in unrecognizable!"

SO I wrote back to her "Don't you understand American english slang?"
Granted I did have many grammar issues, but you could still read for content and enjoy the story ... right? I've been out of school for a few many years and the last college paper I wrote was over a decade ago, Even then my grammar wasn't the best. Always got a A in content, though.

It took me all year to beat into my head the do's and don'ts. AND the worst part of all of this ... grammar rules CHANGE! You finally learn one way to do something and then it changes.

Overall I think we should know the basics, after that creativity rules!

Voice > grammar. Of course, making sense = voice, but just because you have poor sentence structure (or whatever it is), doesn't mean it won't make sense.

Francine is right about a historical piece having its own style. Perhaps a fan of the period would make a better critic, because someone who has never read a historical romance certainly won't be a good judge of one.

As a writer with a bruised ego and slashed manuscript...I agree. Sometimes harping on grammar is not only unhelpful, but discouraging.

I agree with you wholeheartedly. If I wanted grading and punctuation checks, I'd hire a line editor.

I flatter myself that I have a somewhat more-than-instinctual understanding of grammar, thanks to the (near-constant) reading, the (should-be-more-constant) writing, and those aforementioned English classes.

But I do have a list of friends I avoid giving anything of mine to to read, because they go after grammar and nothing else.

I will be honest now and just say it now, when I do a critique I do it all, grammar, flow, plot and anything else I can find.
Maybe that is why some people don't talk to me anymore :P

I feel about grammar like I feel about all rules. You have to know them in order to break them effectively. Depending on a book's voice and characters, every sentence isn't going to be grammatically perfect. However, I think that errors made accidentally rather than intentionally may make the manuscript look unprofessional.

Of course, I am bias. I kind of love grammar.

Grammar is wonderful as a tool to express thoughts. My grammer will alter radically depending on what i happen to be reading at teh time that I am writting. You should have seen the comments I got on a technical engineering essay that I composed whist reading the Three Musketeers. Be true to your context and tell the story, isn't that why people read?