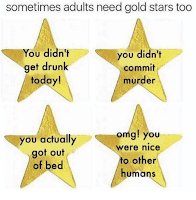 By the time Courtly Pleasures was released I was thick into edits for Courtly Scandals. My husband wanted to have a release date party but it was on a Monday and it was my Mom's birthday and the kids had dance class... can we do it later? Or maybe after the series comes out?

We never did it and I didn't mind. I felt weird about celebrating myself, especially when there was so much to be done.

Fast forward six months to the 2018 Romance Writer's of America national conference in Denver and there I sat, at my first conference as a published author, feeling just as awkward as I always had. Not much had changed. I was still working toward whatever was supposed to come next but, unlike that first conference years ago, it was without a sense of joy. Instead I was stressed out about the books I haven't written yet and needed to write yesterday.

What happened to me? I should be more excited, more innovative, more confident and productive... right?

I was in a workshop given by Rosanne Bane about ways to get past writer's block and had a moment of personal insight. The entirety of her workshop had to do with the physiological function of the brain and the way it responds to stress and, in turn, the way we, as writers, respond (usually by creatively shutting down). She gave a list of better brain responses and the way to train myself to shut down my limbic system response and get back into the creativity of my cortex. The PowerPoint is available to you here.

Her points were easily understandable, the solutions reasonable, and I have already started to change my approaches to self care.

One point she made, more of a side note in the section about the lateral habenula (the teeny tiny section within the limbic system that decreases dopamine) was to follow through on rewards. She advised us to set incremental goals with corresponding rewards for goal completion. I never did this because I was always too busy with the next step. How simple would it be to take the time to pause and congratulate myself?  To be proud and excited and feel successful? Instead I jump right back in and feel only the weight of everything else left undone.

I should have celebrated that contract and the first round of edits. I should have celebrated the second and third round of edits and the book cover. All of these milestones along my journey deserved a moment of acknowledgement. I deserve to acknowledge my own successes as they come. Writing a book, following through, publishing... all of that is hard work and I wouldn't do it, couldn't do it, if I didn't believe in myself. I don't know if it's false humility or that I'm just an absolute buzz-kill, but I feel guilty being proud of myself and celebrating myself and I think it has put a big fat damper on my joy about my craft.

I'm going to set goals (baby-steps) and celebrate myself when I achieve them. I don't think it's a carrot on a stick--I think it's allowing myself to write without worrying about everything I could be doing better and just do it. After all, If I'm not writing forward, I'm accomplishing nothing. So huzzah for me.

Current goal: build sexual tension between my main characters (which is rough because she just had a baby and had been abandoned by her husband before she even knew she was pregnant). It's easier said than done because every time I write, she gets irritable and irrationally suspicious  Once I accomplish this I will get a pedicure as a reward and celebration.

Do you reward yourself for goal completion?


***Note 8/5/18: I finished the chapter that I was struggling with in regard to building sexual tension and then I did NOT go for the promised pedicure because I felt like the reward was bigger than the goal and added a new section to the goal (to lay the foundation for a future conflict) and have not been able to write anything since. I think I need to 1. get that pedicure and 2. make sure my rewards are of like weight with the goal. In this case I should have promised myself a cookie.