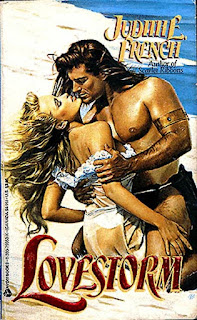 It's a term I've used in the past to mock the romance genre. It comes from an era of romance where the young virtuous ingenue is seduced by the experienced rake. She fights her own desire and, when she gives in, it is often under duress. It's the scenario where she said no but her body said yes. Now I consider that disgusting, it's rape made titillating. It also summarizes the value system of an era where good girls couldn't say yes... and it taught men that no didn't always mean no.

But romance novels did not create this norm, they were a symptom of it. The female readers during this time responded to these books because it was a representation of the social values they were living. Sexual fantasy was just that, fantasy. But the limits on a woman's right to claim her own sexuality was not a fantasy.

These were the romances I started with. In fact, these stories impacted my view about love and sex. I'm still trying to get over that.

Romance has changed as the writers have changed. While it is still a market with, predominantly, women writing for women, that is not exclusive. A good story is still a good story, and (imo) the only thing keeping the romance genre limited to a specific section of the bookstore and a specific demographic is the prejudice in place against the genre.

(While I could talk at length about the ingrained prejudice against romance based on sexism and the patriarchal norms still lingering that want to limit women's sexual agency, this is a post specifically about the changing face of romance.)

So bodice rippers have had their time and the romance industry has evolved. It's to a point where the term has been reclaimed by the industry in much the same way as racial or homophobic slurs are used by people within the culture to take away the power of the word. We have taken ownership of the insult and know that, as a genre, we are above it.

*Click the image above to go to the BuzzFeed link, "19 Things Fabio Is Actually Thinking On Romance Novel Covers."

I think the shift in social expectations for all relationships has really gone into focus on our media. Specifically books. Great points!