Courtly Pleasures is a stand-alone story within a trio of books. Each of these books can be read individually without the reader feeling like they missed an integral part of the story. I, personally, like this about romance. I love getting to know the families and friends of the hero/heroine of a story and then get to see their stories. I love getting a glimpse of the hero/heroine, happy in their life together, during the next novels. It keeps me buying that author again and again because I'm not ready to release that world just yet. And, if I read one out of order, the story is not hurt - it just makes me curious about what came before. In fact, it's fun to see the heroine I loved in book five as a young girl with scraped knees in book two.

When I started writing, I wanted to create a rich world where the readers would want to come back. So far the reviews are strong and I have readers wanting to know what comes next for Frances and Henry. Their love story may have resolved, but the world they live in is continuing. Courtly Pleasures ended at the start of Christmas time. They will spend the twelve days of Christ's Mass at home with their children, Jane, and the goodly members of their household and tenant farms.

Mary made the choice to stay on in London with her previous mistress, Anne Cecil, the Countess of Oxford. Mary is not exactly a servant; she is a gently reared young woman placed in a prestigious household to better her chances of marrying well. As a companion to the lady of the house, she would help with some tasks, but really be there for company. She served Frances in this capacity and now has returned, by choice, to Lady Oxford. Why? Because Mary felt she was needed.

Anne Cecil has recently married the Earl of Oxford and, for her, it was a love match. Although I took some liberties with exact incidences, I tried to stay true to the type of man he was reported to be. As for Mary, I'm not sure what she thinks she can do to make the situation for Anne better, but she's going to, at least, be there for her friend. Whether or not Anne wants her. 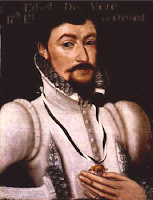 Courtly Scandals is Mary's story. It is set over the twelve days of Christ's mass with Queen Elizabeth's court. The cool head and practical nature that was a rock to Frances is useless in the face of unrestrained revelry and Anne's capricious friendship. Mary must adapt and start thinking about herself for once.

While Mary is a fictitious character, both Anne Cecil and her husband, Edward (Ned) Da Vere, the Earl of Oxford, are real. I have portrayed them in their approximate ages and stage of their relationship circa 1572. The image featured to the right is a portrait of the Earl of Oxford, 1575.

If you enjoyed Courtly Pleasures, you will enjoy Courtly Scandals. If you miss Frances and Henry, don't worry, they'll be back again at Holme LeSieur for Jane's story, Courtly Abandon (estimated release date July, 2018).

Nice reviews! And I see that Eloise James recommended it on Facebook. Way cool!

I'm a fan of series books myself. I always hate to see the complete story ending.

Have a Merry Christmas and happy new year Erin.

Stacy: So far the reviews are great. Even the one that was bad was great - that reader didn't like it because of the history (and that is a great insult). Eloisa James agreeing to promote my book was like my birthday and Christmas presents for the next 5 years. So nice of her.
Dolorah: I feel the same way about series. When I love a book, I'm not ready to say goodbye to the characters and that world. A series means I don't have to. Merry Christmas to you as well! :)

I am really looking forward to these books. You are correct: each one is a stand alone book in itself. Even so, they will connect and paint a picture of that time.