Viewing Your Own Work Objectively

It isn't possible. There. Done. Shortest blog post ever. 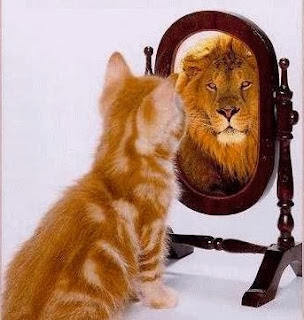 Nah, I was just kidding. My point has been made but I'm still going to babble. And, before I begin, let me explain that I am on pain killers for shoulder surgery. Be warned. I am not bi-polar but I play one on TV.

Okay, on point: Objectivity = impossible.  While I'm writing and excited, the book is the best book ever written. I am a GOD!  And then revisions of the first draft begin and I should not be allowed to live, let alone write. When everything is done and I have a clean, finished manuscript I, yet again, become awesome. At this point I usually don't look at it again and move on to the next project.

From time to time I've unearthed one of my previous works for a submission or competition or such. These times are iffy. I could be far enough removed from it to find the cadence of my writing unfamiliar and be pleasantly surprised by a book that (by that point, it's probably been rejected a few times) is obviously terrible. Or maybe it was so close to my heart that it hurts to even read it with the knowledge that it will remain under my bed. I've been through the gamut of reactions with my courtly books.

Possessing Karma was going to be my break out novel. It was edgy, different, super sexy, a little scary... it merged my love of history with my total fear of ghosts and came out awesome. Or at least I thought it was awesome until yesterday when I decided to do a quick once over for Golden Heart.

Things I remember including as part of my voice and my character's deep pov are not there. I must have cut them in favor of brevity or something. Philippe's a nice guy, maybe too nice. Karma's OCD because I say she is, but I don't show it. Damn. I don't know what I did in the final edit, but my work feels soulless and choppy. No wonder it didn't get the response I expected.

I think I may have to set aside Touched in favor of breathing life back into Karma. Either that or I'll read it again tomorrow and be awed by my brilliance.

I have gone back to read stuff I thought was absolutely brilliant, insightful, and dealt with universal themes.

See, this is the hell of it: I always second-guess myself. Whenever I feel like I'm being perfectly objective about a piece of my writing, I get the nagging feeling that I'm just being insecure and hypercritical. Then when I get the feeling that my work's better than I thought and maybe I've got a shot at publication after all, I read it over again and it feels, as you pointed out, "soulless and choppy." "Humbling," as Susan Kane said. Ick.