Touched by the Past

I'm off and running with my new project. A lot more planning went into this than any other project. My Elizabethans were set in a period where I was already an annoying font of knowledge (not counting confirming dates of choreography and specifics about the 17th Earl of Oxford's inheritance.) My New Orleans story required some Google Earth and some research into Voodoo, but beyond that, I already had a healthy understanding of the pre-Civil war history of the city and recent experiences there in regard to the vibe of the culture.

Touched by the Past, while based on my childhood experiences on the woodland property of the hotel my family owned in Ireland, has required tons of research. From the native species of flora/fauna, tectonic activity and layers of sediment in coastal, South-West Ireland, limestone sink holes, and seasonal wild flower growth, I've buried myself in unexpected research. I thought I had this one in the bag, that my experiences would give me the knowledge base to write this story, but no, I had no prior knowledge about the stations of rank within the Garda, Ogham script, or the equivalent price of a pint of milk. When we lived there in the 80's we had it delivered in glass pints and had to scoop the cream off the top -- is it still like that? I entered into this project with a false sense of security. Reality was hard to swallow and frustrating; I was ready to be writing and ended up mired in research.

That said, I'm making good progress. Just for fun, here is my first 381 for your reading/critiquing enjoyment. I value any feedback you are willing to give.

Tendrils of blue electricity glowed and crackled, hovering over the misty earth. Reaching with fingers of light, it sought her out. Gillian watched, mesmerized, unsure if she should run away or give herself to the power one more time. Fear and excitement paralyzed her and all she could was watch as the living lightning snaked closer, a pulsing stream of incandescence, kinking and curling as it crawled.
All she had to do was show herself, take two steps into the open, and it would touch her, filling her with its earthy energy and memories, knowledge of things she had no right to know. It was tantalizing and, she shivered, scary. Really, really scary. Whenever it happened, she never knew if she would ever find herself again. Then that last time…
Gillian blinked in the early morning light, the memory of the old dream fading as reality settled in. No longer the thirteen year old girl hiding from some fantastical floating light, she knew better now. Experience of years, too many years, schooled her in the harsh realities of life. There was no magic in the forest and never had been; her dreams were based solely on the over-active imagination of a child.
The last time she’d stood here, holding her breath in anticipation at the lower mouth of the woods on the once paved carriage path of long dead aristocrats, she’d been a child in tears about leaving . Now, a thirty-five year old widow with a daughter in college, she didn’t feel any different. The wood before her was just as dark and ominous, and lush and beckoning, as it had been all those years ago.
Her squelched as she shifted within the sodden indents of the manicured lawn. She tucked a stray wisp of her blond hair back under the bandanna and straightened her gloves, ready to work. With a resolute nod, she stomped forward through the wet morning into the shade of the trees. She had nothing to fear here. She was an adult, experienced in forestry and ready to respect the biodiversity that lay before her. The forest would be her friend once more, if not on a magical plane, then on a basic, fundamental one.
She came to save it. 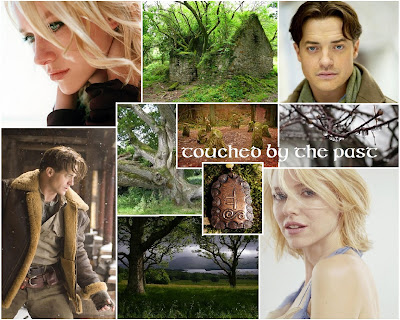 This is currently my desktop wallpaper. As I created it, I found myself using more images of landscape than of people. It made me realize how the forest itself is a dominant character.

I like it. Good connections from past to present. Some editing, certainly needed. But...it is good. Keep going.