Well, in this case, the new book. It's another paranormal, but the paranormal is a benign force, not helpful nor harmful except in that it drives my main character sort of nuts.

The premise:  Gillian, 35 year old widow with a daughter in college (she was a teenage mother) moves back to her childhood home in Ireland to pursue her education and interns at a historic home, now hotel, to help preserve the wooded property. As she works, memories of strange happenings haunt her -- things she dismissed as her imagination. Eventually she realizes that the images she is seeing come from the memories of the forest itself. The forest, so relieved to have an outlet, bombards her memories, some meaningful, some not (they're trees, they don't classify things the way humans do). The information overload gets worse when the forest jumps into a self preservation mode and Gillian has to figure out what the land is trying to tell her.

I'm working in druids, Vikings, and more mundane menaces, like murders and waste disposal. Along the way, Gillian's uncanny connection with the land makes someone nervous, someone who doesn't want his corruption known. Gillian also discovers the woman she is now, no longer defined by her teenage behavior, and has a journey of self (and some sex -- it is romance).

My initial title was Residual Memory, but that sounds a little Sci-Fi. I need something a little sexy, Irish, and creepy. A friend (just now, as I was typing this blog) suggested the term 'knowing,' which I like. It can be deep and transcendental or have a sexual connotation. 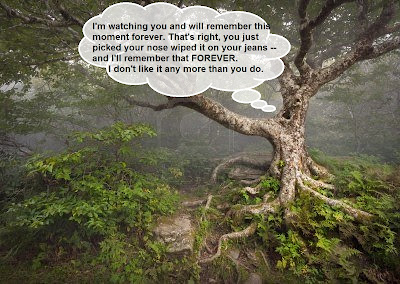 Possessing Karma (the book that is now in edits) is about a woman named Karma who gets possessed, but also about the karma that eventually gets to the cocky, abusive, sexual sadist, pre-Civil war plantation owner ghost. I don't love this title, but it works for now. I do like the double meaning and I think it's got a sexy edge to it (important in romance genre).

As for my sentient trees watching you? Not a clue. Feel free to offer suggestions, silly or serious. Even writing this has been helpful for me getting into a good writing vibe. Maybe inspiration will strike.

"Journey Through the Forest of Knowledge"? No?

How about "The Forest of Love"?

How about I tell you I just SUCK at creating titles? Hee hee!

If you haven't finished writing the book yet, I wouldn't worry too much, though. I usually don't come up with a title until I'm finished.

I know I don't need something definitive. I just want to name the file. Currently, it's called Irish Trees -- not super appealing.

Or something about mist...very Irish.

Oh! So excited you are writing this at last!! I think you are going to rock it. I hope you put a lot of your funny, quirky self into it. :)