Naked I Came From My Mother's Womb


Warning -- some might find this blasphemous or, at the very least, irreverent. Read on at your peril.

There was a woman in the land of Yuppies whose name was Erin; and that woman was imperfect but curvaceous, and one that feared socialized healthcare and eschewed Jehovah Witnesses during dinner time. Her substance was solid, yet jiggly in spots, and she had a mediocre, middle class household; so that this woman was fair to middling in her general social strata.

Now there was a day when the powers that be had a pow-wow. They considered the woman, Erin. They knew there were none like her in the earth. They decided to screw with her most mightily.

And there was a day when her husband was returning from bowling. A phone call came unto Erin and said, “Shit, I was just in an accident,” and the Uninsured Teenager’s father’s car fell upon Brian’s Camry and there was damage. Before that was yet resolved, the editor with the publisher interested in Erin’s book, Courtly Scandals, for whom Erin had made revisions and waited with great expectation, left the employ of the publisher. Then the new editor came unto Erin via e-mail and rejected the manuscript. And while Erin was still disappointed, she fell down the stairs. The great fall smote her foot and she was unable to walk upon it for 8 weeks. And while that foot was still healing, a great Jeep failed to stop in time on the 163 South and crashed mightily into the rear of Erin’s favorite van, causing both the bumper and lift gate to be replaced, and later, the stereo. And while the replacement was underway and Erin’s smote foot was healing, Erin’s boss came unto her, to inform her that the Mosaic program Erin had been instrumental in developing and been teaching in for the past four years was being dissolved. But lo, the boss promised a comparable job for next year, but could not say what it would be. Then Erin arose, albeit on wobbly feet, and did not tear her clothes or shave her head or exclaim anything meaningful.

Again there was a day when Erin returned to teaching and there was much grading to be done and retraining of the students who, in Erin’s absence, erroneously considered her their buddy and not an authority figure. Erin was glad she did not shave her head. And then the school year ended without issue, but Erin and her children were smote with a dreadful illness. And then, while still suffering from the cold, Erin’s doctor spoke of menopause and requested an ultrasound of the female bits. Thus Erin scheduled her probing without rejoicing. Then, while she waited, she received a letter from EDD denying a large portion of her disability. Erin wrote a letter of appeal and swore mightily.

And while Erin was awaiting the violating procedure with distaste and not buying groceries, a Volvo did misjudge her action whilst waiting to turn right on a red and bumped into the new bumper of her favorite van. And in this, Erin was pissed off. She yelled a foul word, unheard by her children.

The rest of this chapter is unwritten. I hope the stupid sequence of unfortunate events end here.

I have always found the Book of Job odd. It’s the only one in the Bible that shows a conversation between God and Satan – so it reads more like Hebrew mythology to me than the inspired word of God. I’ve always gotten a kick out of the pissing contest nature of it. In line with other culture's deities, it shows how much havoc pride can cause. I imagine the group that included it in the Bible decided it was a good allegorical message about holding on to faith in the face of disaster. In fact, in looking for images, I found this (I edited it just a little; however, if you were going to be offended by this post, you probably are already -- so what's one swear word?). 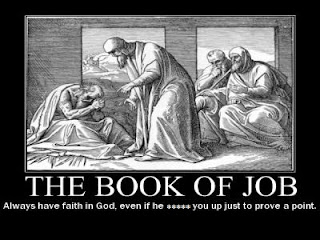 All jesting aside, good things have happened this year as well. Counting my blessings just wouldn’t have worked with the theme of Job. BTW, I do know that many people have it worse than I do. I was just having some fun.

Dude, that is a lot of stuff. I hope that the trend does indeed end here and many good and wonderful things are ahead to make up for it all.

Excellent take on the disastrous events that plague humanity throughout all time. What word did you use, exactly, in front of your little girls??

@Bru -- you know I thought of you when I wrote this, wondered how you were doing. I didn't know your writing had its roots in Star Trek fan fic! I've bookmarked the page and plan to read through it.
@Susan -- the girls had their headphones on and were watching a movie. They didn't hear it, so it doesn't count.