I recently was turned on to the Vampire Diaries. I have read all the Anne Rice vampire books and always enjoyed the Lestat/Louis dynamic -- so jumped in right away to the Damon/Stefan frenemy relationship. Yes, I have a crush on Stefan (never did on Louis -- far too melancholy) and his tattoo, kissable pout, and intense gaze. I also have developed a mini-crush on Damon and his brat prince, great ab, snarkyness. I am not ashamed to find them hot. Plus, it's nice to be able to appreciate the male form without feeling like a pedophile (both actors are within an reasonable age range from my own). Besides the eye candy aspects, I enjoy the characters and appreciate that Elena has a brain and personality of her own and is not defined by her love for Stefan.  I'm almost to the end of season one and don't want any spoilers. In all, I'm enjoying the series and am not embarrassed. I never boarded the Twilight train, but I did used to make a point to be available every Thursday night for Buffy back in the day (I was more a Spike fan than Angel).

Yesterday my husband joined me for an episode and wanted a full explanation of what was going on. As annoying as this was, he redeemed himself by misreading the title, Vampire Diaries (that, and not complaining as I drooled over Damon while he got Elena to button his shirt). This inspired my tasteless fan fiction. I hope you enjoy it and understand that it's meant in fun. 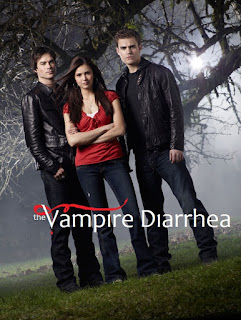 Stefan reclined in his bed, brow furrowed, his gaze unfocused on the portrait in his hand.
“Ever studious Stefan, deep in thought yet again.” Damon's slight drawl drew out the last syllable in a playful purr. “And what are we so engrossed by today?” He sought the answer to his own question, but by the time his hand reached for the item in Stefan’s hands, his brother was across the room.
In a blink Damon was there before him, hands on his throat.
“Step away, Damon.”
“Make me.” Damon smiled, his playful grin not quite reaching his eyes. “Oh wait, you can’t. I will always be stronger than you, better than you, because you refuse to accept who you are,” in a blur of wind, Damon was lounging at the foot of the bed, portrait in his hand. One brow rose in mild surprise. “Katherine? Really?”
In a burst of preternatural speed, Stefan was beside him, looking over his shoulder. “How can two women who look so alike be so different?”
Damon drew one finger softly over antique photograph. “They’re not so different, not really. They both are determined, strong, beautiful…”
“But Elena cares about people other than herself. She is sensitive, giving.”
“She is weak.” Damon murmured his gaze still on Katherine. “Once you turn her, she’ll realize her nature.”
“I’ll never turn her. I love her and would never curse her to our… sickness.”
Damon barked a laugh. “You call our life, our power, a sickness?”
“Isn’t it? I heard you this morning, groaning. Our power comes with so much pain.”
“This was what we were meant to be. The immortality, the beauty, the speed, it has a price and I’m willing to pay.”
“I’m not.”
“Then let yourself die. Take off your ring and step outside. It’s a beautiful morning.” Damon opened the curtain and stared outside. “You think I like having this,” his mouth turned down in distaste, “disgusting, debilitating problem? By the way, have you told Elena yet?”
“I don’t think she’s ready.”
“How is this worse than knowing you’re a bloodsucking killer?”
Stefan looked away, grinding his jaw. “It just is.”
“If you don’t tell her, I will. She deserves to know.”
“I don’t see why it matters to you.”
“It doesn’t. But I’m bored and the idea of her expression when she realizes what you’ve really been doing, alone, after ever meal – well, it intrigues me.” He smirked. “Will love truly conquer all? Will she be as accepting as she’s been of everything else?”
Stefan crossed his arms over his chest, scowling. “Damon, is it worth it to risk Elena’s happiness just to see me shamed?”
Damon paused, considering. “Since you ask that way,” he smiled, this time his eyes glittered, “yes. Definitely worth it.”
“You know you’ll be exposing yourself. She’ll know about you, too – only not how much worse it is for you, considering you feed on human blood.”
“I think she may already suspect me.” Damon tossed the portrait of Katherine toward the bed.
Stefan caught it, frowning. “Why do you say that?”
“Well, I left her a little…” he paused for a moment with a smile, “present in her bathroom.”
“You disgust me.”
“I know.” He clapped his brother on the shoulder, “I know.”

Yes, I know -- I am somewhat déclassé. I've accepted it. And yes, I know my attempt at the Vampire Diaries logo and red swirl is not up to par. I did my best using Paint and it gets the point across.

OMG! I can only imagine Vampire Diarrhea. Vampires with IBS -- the possibilities are endless.

DAMON! I totally have a crush on him... ;) I used to be an "in the closet" fan with this series, but now am open about it. LOL.

Very true to their voices and relationship. Love the smile that doesn't quite convince...well done. :)

Oh, man! You have me laughing. That "present in her bathroom.." great stuff. What poo would a vampire leave? Curiouser and curiouser.

BTW you're the lucky Random.org-chosen winner of my G is for Giveaway post - you get an ebook courtesy of me! Please email me at sashconte at gmail dot com to sort out the details?