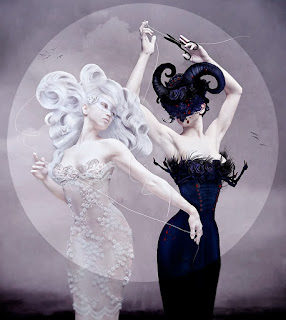 Real people are never black or white, they vary in shades of gray. No one is perfectly good or perfectly evil.

In the world I create, my characters do not have much of a gray area. This is a problem. The characters intended to be likable are likable. The villains are dastardly. As much as I try not to be archetypal, I do type cast and can't seem to help myself. Certain characteristics lend themselves to certain types of people. At face value, they are either good or bad.

But not in real life. In real life the compulsive liar that always has to one up every thing you say also works in the nursery at AIDS outreach events. The Munchhausen syndrome old man who demands the spotlight always be on his ailments or suffering regardless of the situation is a Vietnam vet who lost his leg protecting a peasant girl from being attacked by one of his own platoon. The alcoholic young mother drinks to drown out her memories of abuse is a victim as much as she is an irresponsible abuser herself.  Real life is full of gray areas.

While I do feel my main characters do fall into the gray spectrum, the peripheral characters tend toward black and white. They are either my good guys or bad guys and never the twain shall meet. Until now.

I have a bad guy from the previous book who I really just love writing. In the previous book he was an attempted rapist and ready to sacrifice someone else's life in order to save his reputation.  In this book he's still the unforgiven brat prince, but the jolly side of him is more integral to the story. He, accidentally, solves everyone's problems - which is something that vexes him deeply since their problems were so much fun to watch playing out.  He's almost a good guy, but he's so bad.  Could it be that I wrote a gray character?

Often it's not so much a question of making characters a mix of good and bad as simply remembering that the bad ones will have what seems like a perfectly legitimate reason for doing what they are doing.

I think it's ok for the more peripheral characters to be either black or white; they're job is to effect the MCs in some way, so they only really need to be one thing for that purpose.
It is fun to throw in something unexpected, and I think it's often hard to remember that characters need more than one side to them.

That sounds really interesting. I love my villains too and understand why they went bad. I manage to incorporate a little backstory as the plot progresses so the reader can understand them as well. Still, the actions of a villain should be unforgivable. Or as close to that as you can make. It sounds like your on to something.
Nancy
N. R. Williams, The Treasures of Carmelidrium