I had a wall of Rubbermaid containers in my room, four long, 3 high, for about two years.

My husband hated it.

Let it be known that it was his fault. He brought them in from the garage because he wanted me to sort through them and thought putting them there would inspire me to get it done. He was wrong--I just couldn't bring myself to do it. Besides the fact that going through them would lead serious allergies and require a good days commitment to having no bedroom, it also meant coming to terms with the fact I would never wear those costumes again. That's right, those bins were FULL of Elizabethan lower nobility costumes, early reign and the remnants of the fabrics I used in their construction. Each gown was the product of hundreds of hours of work, much of it by hand. Each gown was a reminder of the wonderful times spent at the Renaissance Faire* as a lady in the court of Queen Elizabeth. Each had been meticulously researched, designed, and constructed based on portraiture of the period, Patterns of Fashion 3 by Janet Arnold, and the guidance of costuming mentors within the guild. These gowns (I had a few men's suits too) represented some of the first times I let myself be proud of work I'd done. Yes, there were plenty of mistakes, but when I wore them I felt accomplished. No false humility--I'd made something from nothing and I felt great about it. (Note: not all of the costumes were 100% historically constructed. I made modifications for the ease of dressing since I don't have servants.)

This year I finally went through the boxes and, as I knew I would, gave almost all of them away. I donated them to a dear friend who will see they find good homes and, hopefully, be worn again. It's bittersweet, but it's okay. I keep telling myself that. At least my bedroom has a functional window again.

I may not be participating in living history events for the time being, but my love of costuming has an outlet in my historical romance. You would be amazed at how much I had to cut out of Courtly Pleasures to make it readable. The False Lady Beatrice, my current work in progress, has a mixture between courtly fashions and the functional clothes of the peasantry. I'm having fun with the dichotomy and what that says about Beatrice's identity.

Just for fun, here is a short video showing the steps to dressing Queen Elizabeth I. 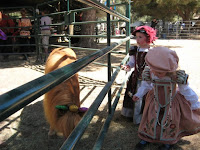 My daughters, ages two and three. I did not include oversleeves, corset, or farthingale because, you know, the age two and three thing. I wanted these to be light, breathable, and to be able to throw these in the wash Circa 2009
I am in the gray dress (it's the awkward, one-piece dress mentioned above) dancing with an actress portraying Mistress Anne Vavasour.

*Faire: yes, I know it's spelled wrong, but that's how my Ren faire spelled it to make it olde English-y.

knowing how much detail that goes into such a creation, I wonder how long and how many seamstresses it took to put together just one dress?

It must have been really really difficult to cut out some the knowledge you have about that time period. It certainly gave you a true understanding of the culture.

Your babies are so cute! They look like little princesses!

The final dress (blue) is exquisite. The queen comes in as a second in this photo.

I found this on internet and it is really very nice.
An excellent blog.
Great work!