So many historical romance readers are familiar with the curtsy. It is woven throughout period stories and almost is the norm for anything that is olde-timey (<== not a real word). However, just like the value of virginity, it is not true for ALL times. Particularly, not Tudor.


The curtsy is limited to women. It began it's life known as the courtesy which, as the word implies, was meant to show courtesy or respect to a better or peer. The woman would start feet in turn out, one behind the other, and lower themselves at the knee with their back straight. It is an action similar to a plié in ballet.

What we now know as the curtsy evolved from the older reverance. In Italianate Renaissance dancing there is a move called the riverenza. Like a curtsy, it is similar to a plié but with the feet parallel. This dance move marks the start of most of the Italian choreography of the period, and Italian dancing was considered very sophisticated and practiced by the English court. The Italian choreographer, Caroso, uses the riverenza while the French choreographer, Arbeau, uses reverance ( <== real word).

During this same period, the polite response to one's betters or peers was a reverance (often referred to in period pieces as a bow or curtsy, but the period term is reverance). This motion was done both by men and women. Stepping back with one foot, the other foot pointed and forward, the courtier would shift weight to their back leg and bend at the knee, holding the position until signaled to rise. This motion gave men an opportunity to "make a leg" and show off their calf muscles (they were wearing slippers with form fitting silken hose and slops that ended above the knee, their calf was the most exposed body part and consider sexy on a man). Women did the same, but only the toe of the slipper might be seen peeping out from the hem of her skirts.

A curtsy is faster, but a reverance is more elegant. It makes more a spectacle of showing respect. While the word was in existence in the 16th century, it was not the customary action for show of respect until toward the end of the 17th century. It is no longer in use, but it was during the Elizabethan era. Since I do not write in dialect, I try to use a scattering of period, though some are obsolete, words to give the flavor of the era. And, since what a modern reader may think of as a bow or a curtsy is not the same action as a reverance, I decided to stick with it. I deal with the foreign feel of the word by describing the action during the first example of it in each of my books. 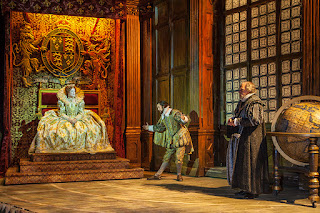 When I first started writing fiction set in the Elizabethan era, I looked up the word. I wanted to make sure I was using the historically accurate phrase and action and not just adopting renaissance faire-isms. If you were to Google "reverance," they'd automatically show you results for "reverence."  You have to actually select the small print that says "search instead for reverance" in order to see references to it. They're there, you just have to actually look for them instead of accepting the first Google option that says it's a misspelled word.

I had to fight to keep it in the book and, while it might have been easier to give in to the popular terminology even if they're not right for the period, I'm happy I kept it. I did put due diligence into being true to the era and though I made mistakes, my choice to use use the reverance as the form of polite greeting was not one of them.

So that is it's origins. Elegant, to be sure. I love how you used it in your book to also show how it is used as an insult following a pithy response to some bitchy comment.