The Process from Contract to Publication

I signed my contract in mid-August and received my first round of edits toward the end of September.

The first round of edits was content based. While there were some grammar/punctuation/word choice changes suggested, it was about the smoothness of the read. These came directly from my editor. The comments had to do with going deeper into my main character's points of view, fleshing out scenes, etc... This was the most difficult for me because it addressed my story. It's easy to fix a misspelling, but harder to accept that you missed a critical aspect of the character. That said, it wasn't as emotionally painful as I expected. All the comments made sense and the changes were all toward making it a better story. That round of edits were due in the first part of October, so I had about two weeks to complete them.

I received the second round of edits a week later (mid-October). These were the line edits and dealt mainly with typos, spelling, or grammatical errors. Based on the notes, it seems that there were two line editors who went through the manuscript. Some corrections embarrassed me and some surprised me. I learned a few things about hyphen use but still don't understand why they would delete my ellipses (...) and then replace it with another set of ellipses (I'm assuming it has to do with formatting, but it's still a mystery). Overall, this process was smooth. It was due a week later.

Round three was the galley edits. This is the book, coded for epub and not easy to change at that point. Part of me wanted to write it off as done but I am glad I didn't. I listened to it read aloud and caught so many things that would have been downright embarrassing. After all the pairs of eyes that had gone over the document, there were still issues and it was no longer a document that could be easily fixed. I will never again be critical of minor editing errors in published novels.  Those edits were due the beginning of November and then the galley was made available for professional reviews the next day.

So from the end of September to the beginning of November, Courtly Pleasures went from manuscript to novel. It's out there right now for industry professionals to read and review prior to release. The release date is just over three weeks away.

The whole things was less than three months from the date of the contract. It's been a whirlwind and I'm a little stunned.

Now I have to focus on promotion. This is intimidating because I'm not extroverted at heart (I categorize myself as a friendly introvert) and I'm not a business/marketing expert (but I'll learn). Wish me luck. 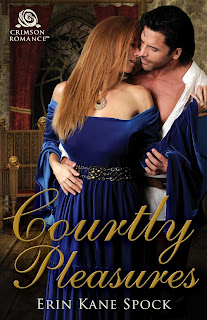 Courtly Pleasures is available for pre-order now.
Click on the image above.